In the late 1950s and early ’60s, there were few bigger stars than Jack Scott. With his signature mix of snarling rockers and soothing ballads, the Canadian-born, U.S.-based musician scored 19 hit singles in just 41 months, a feat achieved by only a handful of other pop acts, including the Beatles. And seven of those hits were on his self-titled debut album.

Blessed with a superb baritone and a wide vocal range, Mr. Scott was one of early rock’s most gifted male singers, surpassed only by Roy Orbison and Elvis Presley. And, unlike Mr. Presley, he wrote his own songs.

Mr. Scott’s death on Dec. 12, of congestive heart failure, led to an outpouring of tributes from musicians and fans all over the world. Robert Gordon, the American rockabilly star and occasional actor, whose version of Mr. Scott’s anthemic ‘The Way I Walk’ featured in the movie Natural Born Killers, told The Globe and Mail, “Jack Scott was a major influence on me, a first-generation rocker who was bigger than life. I’ll always be a huge fan.” Canada’s Russell DeCarle, of the Juno-winning country group Prairie Oyster, sang Mr. Scott’s ballad ‘What in the World’s Come Over You,’ when Mr. Scott was inducted into the Canadian Songwriters Hall of Fame in 2011, and regards him as a musical giant. “Jack was a tremendous singer and songwriter,” Mr. DeCarle says. “Country, gospel, rock ’n’ roll, blues and rockabilly – he could do it all.” 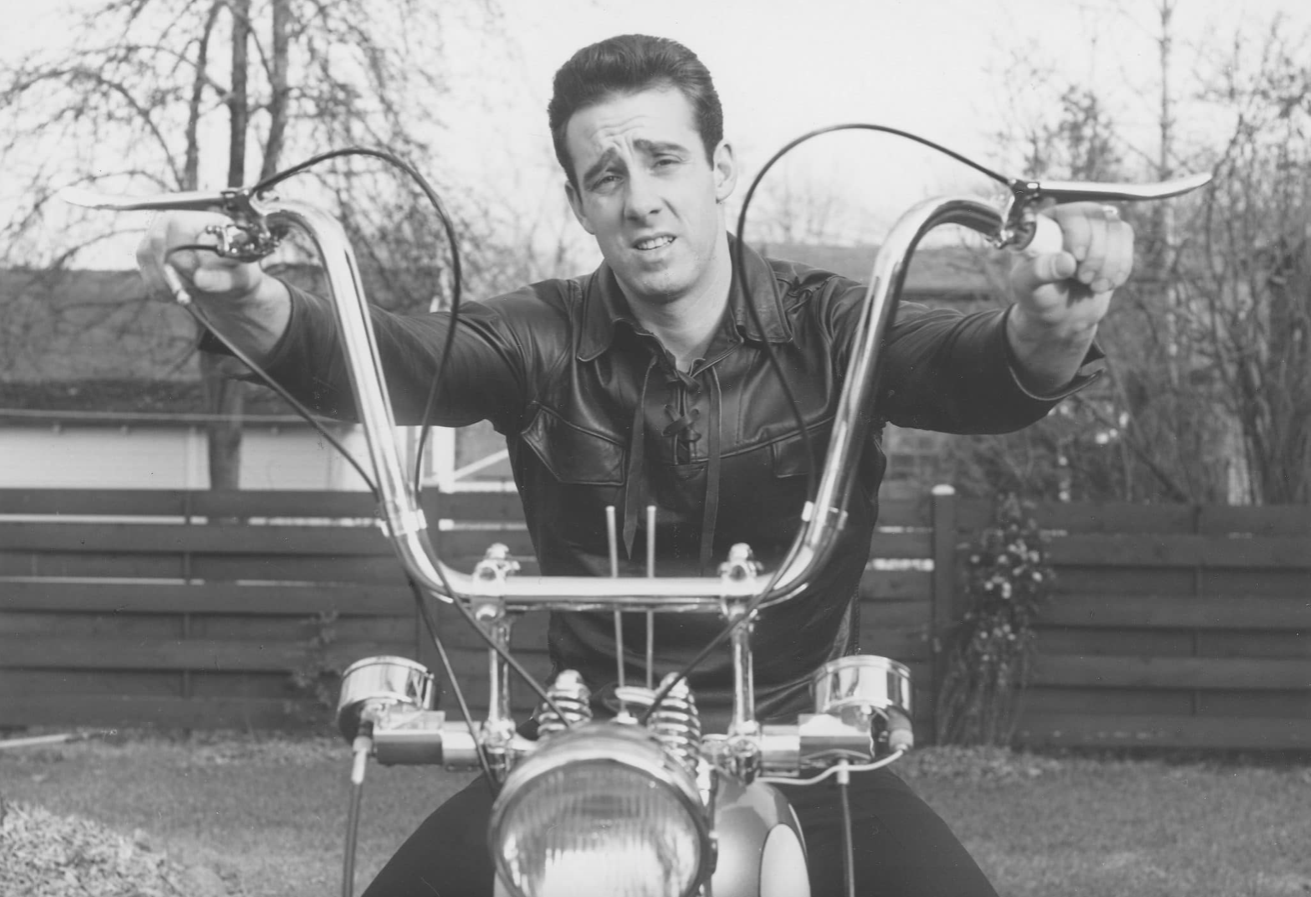 Yet Mr. Scott’s accomplishments are often overlooked, while peers like Eddie Cochran and Gene Vincent, who had far fewer hits, sit comfortably as recognized legends in Cleveland’s Rock and Roll Hall of Fame. In 1979, when he performed at Toronto’s the Edge, The Globe and Mail called Mr. Scott “rock’s forgotten man.”

“How could someone so successful be so unknown?” asked Craig Morrison in Go Cat Go!: Rockabilly Music and its Makers. “Is it because [Scott] was a lone wolf, seemingly not part of a regional scene or community, or because there have been no notorious events, no scandals?”

Certainly Mr. Scott, whom one rockabilly website calls a “Canadian-born, Italian hillbilly who worshipped Hank Williams,” lacked Jerry Lee Lewis’s sensational backstory. But the reasons for his near-anonymity have a lot more to do with how the ‘The Way I Walk singer’ did things his own way. In his essay for the Classic Scott box set of recordings issued by Germany’s Bear Family label, music historian and Hank Williams biographer Colin Escott described Mr. Scott as a “complex person,” whose image as a weightlifting, Harley-Davidson-loving tough-guy singer was “strangely at odds with the real man.” Mr. Scott once abandoned Dick Clark’s Caravan of Stars because he missed his girlfriend and family, prompting Mr. Clark to drop him from future tours. And just as he was gaining traction as a rockabilly and country hitmaker, he released two albums that left radio programmers scratching their heads: one a gospel collection; the other a tribute to his musical hero Hank Williams. 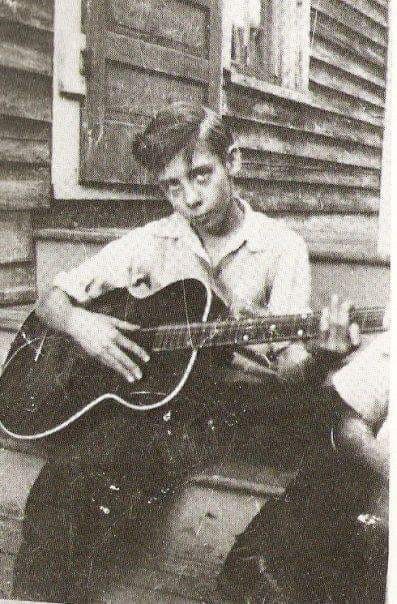 Mr. Scott was born Giovanni Domenico Scafone Jr. in Windsor, Ont. on Jan. 24, 1936. He was the first of seven children born to Laura Scafone (née Franks) and Giovanni Scafone Sr., who had emigrated from Italy five years earlier and learned to speak English from listening to the radio. His son developed a love of country music from listening to programs like Louisiana Hayride and The Grand Ole Opry. Mr. Scafone Sr. responded by buying his son a guitar and teaching him a few chords. Soon he was singing, too.

In 1946, the family moved across the river to Hazel Park, a working-class neighbourhood of Detroit. There, the teenage Giovanni Jr. began performing at high-school concerts with his sister Linda. A local disc jockey invited them on his radio show and suggested the aspiring country singer change his stage name to the easier-to-pronounce Jack Scott. By the mid-1950s, the muscular Mr. Scott, who worked at a gas station and as a truck driver to help out his family financially, had formed a hillbilly band called the Southern Drifters, in a nod to Hank Williams. They started playing strictly country hits in local dance halls, until rock ’n’ roll took hold. As Mr. Scott told Toronto DJ and rockabilly collector Dave (Daddy Cool) Booth: “I was doing nothing but country songs until I heard Elvis Presley’s first records. It all blended [and] the audiences loved one as much as the other.” 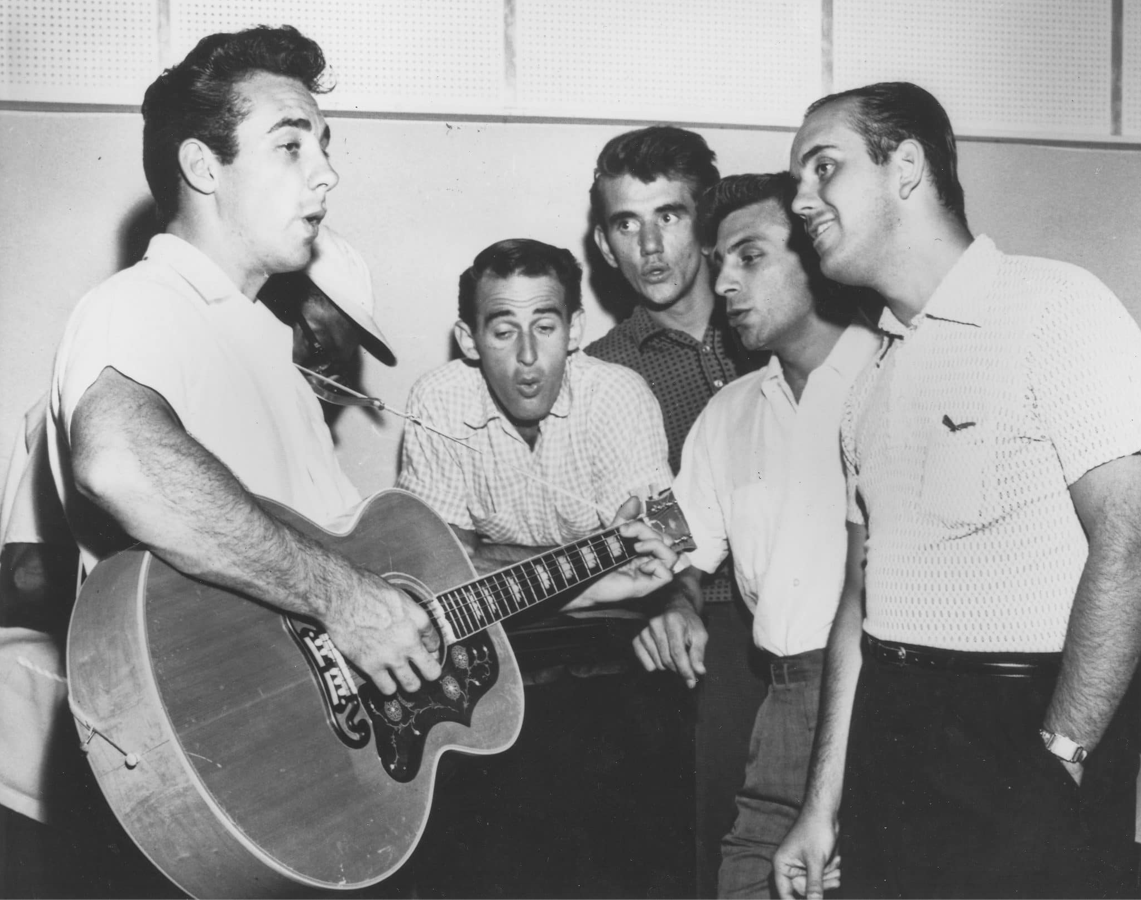 After three years, Mr. Scott signed his first recording deal and cut two original compositions in 1957 for the ABC Paramount label: the angsty rocker ‘Baby She’s Gone’ and the loping ballad ‘You Can Bet Your Bottom Dollar.’ Like the subsequent single, which featured uptempo and languid originals, it caught on locally but failed to make wider waves. His breakthrough came that year when Mr. Scott changed labels and hired the Windsor, Ont., vocal quartet the Chantones to back him. Like Mr. Presley’s the Jordanaires, the Chantones’ rich harmonies added a key ingredient and helped to define Mr. Scott’s striking sound.

Mr. Scott had written a hard-rocker called ‘Greaseball’ about a Windsor friend who did time in the Guelph Reformatory for assault. His new label, Carlton Records, worried that ‘Greaseball’ might be considered offensive, so Mr. Scott changed the song title to ‘Leroy’ after seeing “Leroy Was Here” graffiti on a washroom wall. Backed with ‘My True Love,’ Mr. Scott’s slow-burning ballad of devotion to his first girlfriend, it became a double-sided monster smash, with ‘My True Love’ hitting No. 3 on the pop charts and Leroy (later covered by U.K. rocker Shakin’ Stevens) making the Top 10 of both the pop and R&B charts and selling over a million copies. His self-titled debut album featured a dozen songs – all but one original and with backing on most from the Chantones – of which seven became hit singles. Mr. Scott, it seemed, had the Midas Touch. 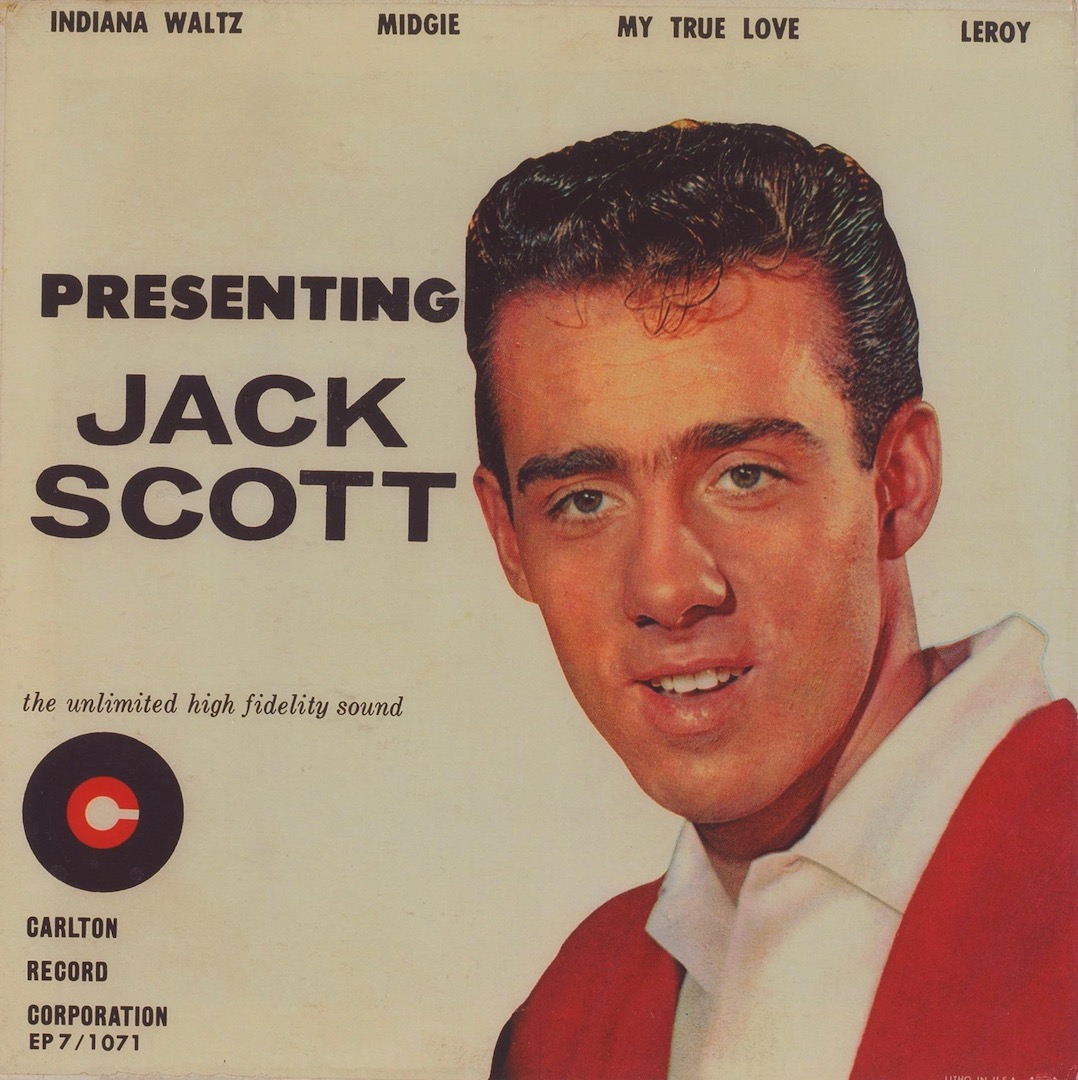 ‘The Way I Walk’ wasn’t one of Mr. Scott’s biggest hits, but with its sultry swagger and menacing air, it proved to have legs and sealed a darker side of Mr. Scott’s image. “Jack Scott sounded tough, like someone you wouldn’t want to meet in a dark alley unless he had a guitar in his hands,” critic Bill Dahl wrote. “When he growled ‘The Way I Walk,’ wise men stepped aside.” As Detroit’s first rock star, with appearances on American Bandstand, Mr. Scott was offered a record deal with Motown’s Berry Gordy but felt his sound better suited to RCA and signed with the label’s Chet Atkins in Nashville. When the hits slowed down, Mr. Scott simply took it as an opportunity to spend more time at home with family and friends.

The rockabilly revival of the 1970s drew Mr. Scott out of retirement. When he appeared in England for the first time, he was surprised to find his star hadn’t faded at all. Enthusiastic fans were calling for songs he hadn’t sung in years, and Led Zeppelin’s Robert Plant even showed up backstage seeking his autograph. Mr. Scott returned to Canada numerous times during the late ’70s and ’80s as a more retiring but still vital performer. Jack DeKeyzer, who backed him at Toronto’s Horseshoe Tavern in 1987, remembers the incongruity of a bearded man in a golf shirt and shades in front of Mr. DeKeyzer’s leather-clad band. “We were a little taken aback,” says the Juno-winning blues guitarist. “He was a lovely guy to work with, extremely mild-mannered and modest – but more of a writerly type than a wild rock and roller.” 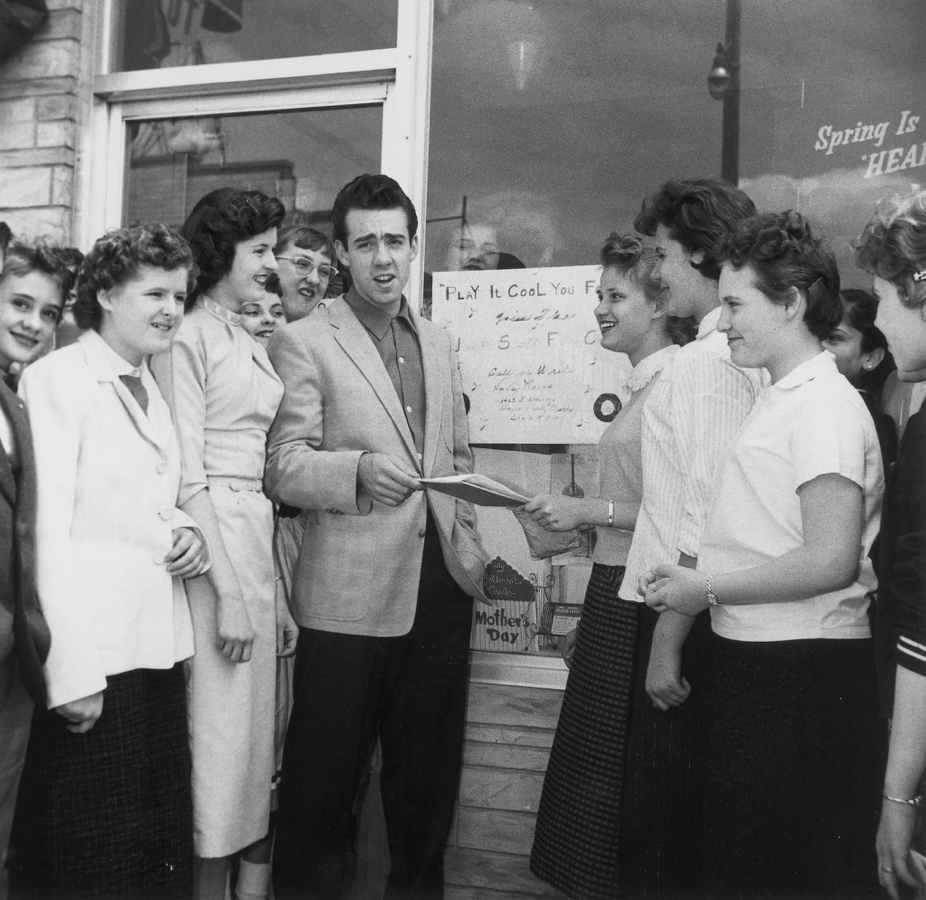 Mr. Scott’s songs have been covered by everyone from Glen Campbell and George Jones to Tom Jones and the horror-punk band the Cramps. His doo-wop song ‘Goodbye Baby’ was featured over the closing credits of 1982’s coming-of-age movie Diner. He released his final album, Way to Survive, in 2015 on the Finnish Bluelight record label. Meanwhile, his stature in his native Canada has grown ever since his induction into the Songwriters Hall of Fame. Fans like Warren Cosford, a former radio executive, have been among those advocating for greater recognition of Mr. Scott’s contributions to music history.

“Jack was Canada’s first rock and roll star, a truly great singer and songwriter who inspired many kids in Canada like me to start bands,” Mr. Cosford says. “Unlike a lot of one-hit wonders, he could write in many styles, including the gospel of ‘My King’ and the European folk of ‘Bella,’ where he tapped into his family’s roots. That meant a lot to Windsor’s Italian community. For all that, he deserves to be inducted into the Canadian Music Hall of Fame.” Insiders say that such an honour was already under consideration and is likely to happen.

Mr. Scott, who was 83, leaves his wife, Barbara Ann; daughters, Renee Godin and Jackie Matthew; two stepsons; one grandson; siblings Larry, Ron, Jerry, Linda and Laura; and nieces and nephews. He was predeceased by his brother Jimmy. One of his nieces, Rio Scafone, is a rockabilly singer proud to be following in her uncle’s footsteps. She paid tribute to him on her Facebook page: “Thank you Uncle Jack for breaking your own rule of never singing at weddings and playing with me and Sean at my wedding – until the cops came and shut us down!”

Originally published online in The Globe and Mail 21 Dec. 2019