She was Canada’s consummate country music queen: petite, buxom and with towering hair to match a voice that could scale heartbreaking heights. Beginning in the late 1950s and early ’60s, Lucille Starr was also a trailblazer, singing in both English and her native French while becoming the first Canadian woman to sell one million records and the first to perform at Nashville’s famous Grand Ole Opry.

There were many other firsts for the feisty francophone artist, an accomplished yodeller who yodeled Cousin Pearl’s character on TV’s The Beverly Hillbillies. Signed to A&M Records in Los Angeles with Bob Regan, her partner in the Canadian Sweethearts duo, Ms. Starr was simultaneously groomed as a solo artist by A&M’s Herb Alpert, of Tijuana Brass fame, and scored a bilingual global hit with The French Song, the label’s first gold record. “Lucille’s voice went straight to my heart,” Mr. Alpert told The Globe and Mail. “She was one of the best singers I ever heard, and a lovely lady.” 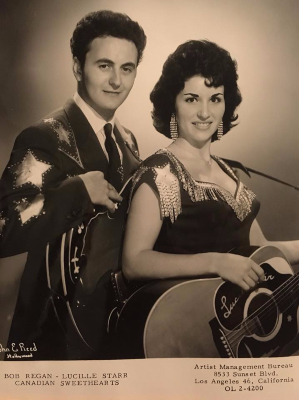 When the 82-year-old Ms. Starr died in Las Vegas on Sept. 4 after a lengthy illness, Canadian musicians were effusive in their praise. “She is Canadian royalty,” the award-winning country singer Michelle Wright tweeted. “Any time I had the opportunity to be around her she was bigger than life with a wonderful laugh and so beautiful and down to earth.”

Canadian Music Hall of Famer Sylvia Tyson, who performed and recorded with Ms. Starr, called her “simply the best female country artist Canada ever turned out, with an extraordinary voice and great stage presence – so full of energy.” Added Ms. Tyson: “Plus, she was gorgeous and built like Dolly Parton, which didn’t hurt.”

Others tell stories of Ms. Starr’s generosity and humour. Alt-country singer Lori Yates remembers how the veteran artist made her feel welcome at the Canadian Country Music Awards when she was a newcomer in the business. “I was just this punk-rock kid from Toronto’s Queen Street,” Ms. Yates recalled, “but Lucille was so kind and gracious to me when the rest of the old guard were giving me side eye. I’ll never forget how classy she was.”

Bruce Good, of the Good Brothers, recalls the time backstage at a telethon when Ms. Starr hooked pieces of cabbage from a food tray to her earrings – and then promptly when out on stage to perform a duet with Ronnie Prophet. “I couldn’t believe she did that,” Mr. Good says, “but she was a delight, always in for a laugh.”

Yet there was plenty of pain behind the laughter. Ms. Starr had a deeply unhappy marriage to Mr. Regan, with whom she had a son, and suffered both abuse and infidelity by her husband. “I went through living hell but I loved music that much,” Ms. Starr told the Winnipeg Free Press in 2010. “I wouldn’t change anything – well, maybe I would have cut my first marriage a whole lot shorter.” The fact she endured that misery for two decades (she and Mr. Regan continued performing together but finally divorced in 1977) makes her accomplishments all the more impressive. 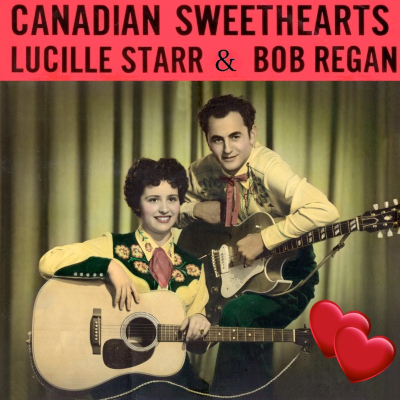 Ms. Starr was born Lucille Marie Raymonde Savoie on May 13, 1938 in the French-speaking community of Saint Boniface, Man., the only child of Gerard Savoie, a machinist, and his wife, Aurore. At an early age, the outgoing girl showed interest in performing, taking part in a church play without her parents' knowledge and singing what she called “naughty little songs” taught to her by farm workers who paid her a penny for every performance. After moving briefly to Windsor, the Savoie family settled near Coquitlam, B.C., in Maillardville, the largest francophone community west of Manitoba at the time.

Young Lucille’s interest in music deepened. She joined a local French choir, Les Hirondelles, and one day the teenager boldly walked into a radio station and expressed interest in singing solo on air. Local trio the Rhythm Pals, in studio at the time, provided accompaniment and were impressed with her talent. Then Lucille met Mr. Regan (born Robert Frederickson), a guitarist performing with his brother Keray in the Peace River Rangers at a wedding gig. The two soon began recording numbers like Eeny Meeny Miney Moe and No Help Wanted, first as Bob and Lucille and then the Canadian Sweethearts, with Lucille’s fierce rockabilly yelp complimenting Bob’s fiery country twang. They married and toured Canada in the 1950s and ’60s, sometimes on bills alongside legendary Canadian performers like Hank Snow and Wilf Carter. 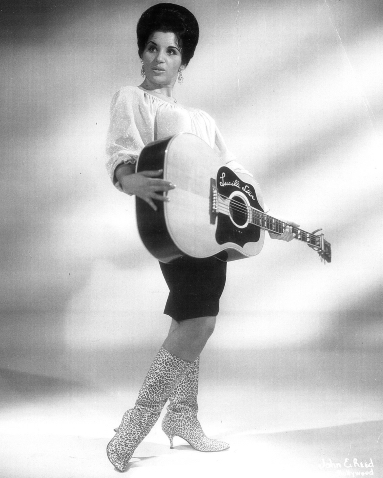 The couple relocated to Los Angeles where rockabilly artist and producer Dorsey Burnette introduced them to Mr. Alpert, who signed the pair to his new label. Mr. Alpert produced their debut album, Introducing the Canadian Sweethearts, a mix of pop, folk and country covers mixed with a few Regan originals. But Mr. Alpert had bigger designs for the singer with a distinctive vibrato, and a new stage name: Lucille Starr. Mr. Alpert produced her solo debut album, featuring a yearning French ballad, Quand le soleil dit bonjour aux montagnes, which was renamed The French Song because he couldn’t pronounce the original title.

Sung in French and English, The French Song took off in 1964, competing with hits by the Beatles and others at the height of the British Invasion. It ultimately sold more than seven million copies worldwide and launched Ms. Starr on an international solo career that took her to Europe, Asia and South Africa, where her album with Mr. Regan was retitled Lucille Starr: South Africa’s Sweetheart. In the Netherlands, Ms. Starr was presented with the prestigious Golden Tulip Award and appeared at Amsterdam’s Grand Gala du Disque. She also performed on such U.S. TV shows as Shindig! and Hullabaloo.

Other solo hits followed, including two more bilingual numbers, the bouncy Jolie Jacqueline and the aching Crazy Arms. None of this went down well with Mr. Regan, whose jealousy with his wife’s success led to affairs with other women. Ms. Starr later admitted that her husband also beat her. “I couldn’t leave,” she told writer John Einarson, “because he threatened to take my son, Robert, away from me” (Robert had been born in Toronto in 1955 while the couple was on an early tour). Due to contractual commitments, Ms. Starr had no choice but to continue touring and recording with Mr. Regan. A new record deal with Epic saw Ms. Starr and Mr. Regan work with famed Nashville producer Billy Sherrill for the Sweethearts' 1967 album Side by Side: Pop & Country and Ms. Starr’s 1969 release Lonely Street.

While performing solo in Sarnia, Ont., in 1976, Ms. Starr met Bryan Cunningham, a petrochemical operations supervisor who had been invited to her concert by the promoter and then given the opportunity to meet the performer backstage after the show. “We bonded instantly,” Mr. Cunningham recalls, “and later stayed in touch by phone.” Once her divorce from Mr. Regan was finalized, Ms. Starr married Mr. Cunningham, who was also divorced, in Las Vegas where they eventually settled. 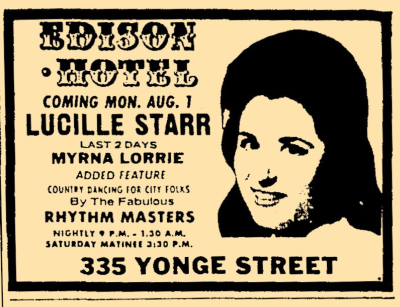 Ms. Starr became stepmother to Mr. Cunningham’s two children from his previous marriage. Shannon Cunningham recalls the colourful character that came into her and her brother’s world. “With her Hawaiian muumuu, impossibly high hair and diamond-studded false fingernails, Lucille was like a cartoon come to life,” Shannon says. “She was a wicked prankster – honey on the toilet seat, short-sheeting the bed, shutting the hot water off in the middle of a shower, all the classics. But she showered us with love and Christmases with multiple dishes of everything, all home-cooked. It was like Willy Wonka – just nuts. And she’d tell stories and have us in stitches and then, on a dime, pick up a guitar and break into a Cajun song.”

Her son, Robert, who became a guitarist himself and once played in a later version of Buffalo Springfield, realized the depth of his family’s musical legacy while working as a session musician. “During the 1970s I did a little work for Phil Everly and found out the Everly Brothers once opened for my parents,” Mr. Fredrickson says. “It’s a pretty amazing history.” 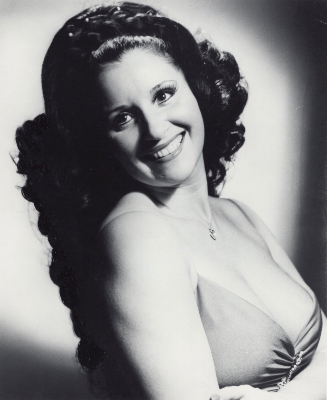 Although Ms. Starr kept performing, the hits stopped coming and she began facing health issues. She had an operation on her vocal cords in the 1980s and then she underwent brain surgery for a non-malignant tumour in 2011, which left her with damage to her short-term memory and a significant loss of vision, which brought an end to performing. Her husband, Bryan, the love of her life, was her devoted caregiver to the end.

Along with all her many accomplishments, including being the first female artist inducted into the Canadian Country Music Hall of Fame, Ms. Starr is fondly remembered all over the world for her signature vibrato and passionate delivery – including yodelling – on a wide variety of hit songs. In her honour, the city of Coquitlam named one of its streets Lucille Starr Drive. Fans are still hoping for her induction into the Canadian Music Hall of Fame.

Originally published in The Globe and Mail 12 September 2020