Cover Story: Owen Pallett - Has Something to Prove His work has won Grammys, JUNOs and an Emmy, and he’s been nominated for an Oscar. He’s an acclaimed solo artist, frequent collaborator with Arcade Fire, composer for ballets and symphonies, and the music industry’s go-to guy for lavish orchestral arrangements. On top of that, Brian Eno is one of his biggest fans.

And yet, Owen Pallett still finds himself wracked by self-doubt. “I always feel like I have something to prove,” admits the 34-year-old indie pop auteur. “I’m constantly trying to prove to myself that my songs are worth writing. I don’t see that as a bad thing,” he adds. “A lot of songwriters out there haven’t settled into a confident state.”

Growing up on a small farm outside of Toronto, Pallett began studying music at age three, playing violin in a youth orchestra at 12, writing songs at 14, and was accepted to the University of Toronto to study composition on a scholarship, graduating with honours in 2002. He initially recorded in the band Les Mouches with drummer Rob Gordon and guitarist Matt Smith, before writing and recording as Final Fantasy, a name taken from his favourite video game.

A one-man string section, performing with looped violin, vocals and synths, Pallett was hailed as a virtuoso. While arranging strings for Arcade Fire’s Funeral and Neon Bible albums, he recorded his Final Fantasy recordings Has a Good Home and He Poos Clouds. The latter won the first Polaris Music Prize in 2006.

Still, Pallett plummeted into despair. “Most of my low points have been private meltdowns,” he confesses. “I get too wrapped up mentally in the music I’m making and it screws up my chemicals.” His worst time came in early 2007, after parting ways with Leon Taheny, his main collaborator on He Poos Clouds. “I had to do something different, so I went to my parents’ house and tried to record,” Pallett recalls. “But I had no background in home recording. I got so depressed that I stayed in bed for five weeks.”

“When I’m making my records I’m primarily interested in making something beautiful.”

The turnaround came when he dropped the Final Fantasy moniker, after legal threats from the video game’s Japanese owners, and began recording under his own name. His first release as Owen Pallett was 2010’s Heartland, an orchestrated concept album that drew widespread praise. Pitchfork called it “the pop Brian Wilson might have made had he grown up infatuated with [Broadway musical composer Stephen] Sondheim rather than [vocal pop group] The Four Freshmen.”

At the same time, Pallett worked on Arcade Fire’s The Suburbs, which swept the Grammy, JUNO and Polaris awards. Suddenly, he was in demand by major pop artists, lending string and orchestral arrangements to recordings by the Pet Shop Boys, Duran Duran and R.E.M. More recently, artists including Taylor Swift and Franz Ferdinand have called for his services. 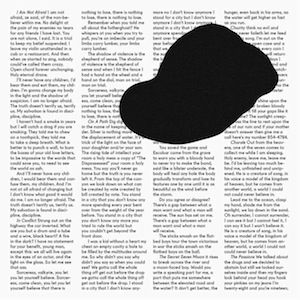 Film work also came calling, including the Cameron Diaz movie The Box, the Chlöe Sevigny thriller The Wait and the Oscar-nominated Spike Jonze sci-fi romantic comedy Her, starring Joaquin Phoenix. Surprisingly, film scoring doesn’t thrill him. “It’s usually the least collaborative act of music-making,” says Pallett. “Your score is often a slave to the picture rather than the other way around. Plus, you have to consider the saleability of the movie and manipulating audiences’ emotions.”

Doesn’t Pallett worry about his own albums’ saleability, or effect on listeners’ emotions? “Sure, I’m always trying to listen to my records through the ears of my potential audience,” he replies. “But when I’m making my records I’m primarily interested in making something beautiful.”

Pallett’s new album, In Conflict, certainly features some of his most beautiful – and disturbing – music to date. “I think I’m getting closer to the balance of scary and funny and optimistic,” he concedes. The album may also be Pallett’s most accessible to date. Eno, one of his heroes, plays guitar on the title track, synth on “The Riverbed” and sings layered back-up vocals throughout. Pallett calls him “my magical amulet.”

Is Pallett now ready to perform for larger crowds? “Not really,” he says, laughing. “With Heartland, I felt I’d reached my biggest audience – and loved it.” He adds, “If I can keep playing the same size rooms for this record and the next, I’ll be very happy. I’ll feel like I have a sustainable business model.”

♦ Pay your fellow musicians and crew more than you yourself are getting paid. If you are making more money than they are, give them a raise.  Especially your drummer.

♦ Don’t tour. But if you must tour, tour Italy and Spain.