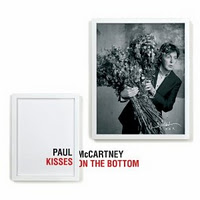 The former Beatle has long been inspired by the music of his parents’ generation—think of songs like “When I’m Sixty-Four” and “Your Mother Should Know.” An homage to songs of the 1930s and ’40s, McCartney’s 15th solo album includes his loving covers of classics like “Bye Bye Blackbird” and “Ac-Cent-Tchu-Ate the Positive,” both featuring piano solos by Diana Krall. Two of McCartney’s originals are steeped in that era: “Only Our Hearts,” with guest Stevie Wonder, and the fine “My Valentine,” featuring Eric Clapton.