Rick Springfield - Songs for the End of the World 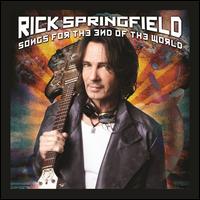 There’s no end in sight for Springfield’s multifaceted career. In fact, the Grammy-winning singer and actor, best known for his hit “Jessie’s Girl” and starring as Dr. Noah Drake on General Hospital, has been busier than ever. In 2009, he appeared as a hedonistic version of himself on Californication and then released his best-selling memoir, Late, Late at Night. Earlier this year, he starred in An Affair of the Heart, a documentary about his enduring bond with his adoring fans.

Now Springfield, 63, has released his 18th album, which finds him rocking out like a man half his age. The opening “Wide Awake” careens around at a reckless pace, while “My Last Heartbeat” boasts a heavy crunch. “Joshua,” “Love Screws Me Up” and “I Hate Myself” tackle such varied topics as family, relationships and his lifelong battle with depression. Fuelled by honesty and high-octane energy, Springfield’s remarkable ride shows no sign of stopping.