TV Documentary: Rise Up - Canadian Pop Music in the 1980s 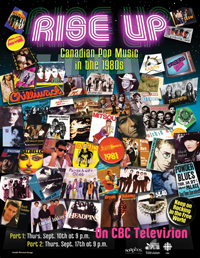 The 1980s was the visual era, a time of aerobics, big hair and even bigger shoulder pads. The decade sees the rise of music videos and the arrival of the digital age, which brings everything from Pac-Man games to compact discs. It’s also the time when Canadian music explodes internationally. Mixing concert clips and interview footage, Rise Up digs up a treasure trove of gold and platinum hits, from Men Without Hats’ “The Safety Dance” to Bryan Adams’ “Summer of 69,” to showcase Canadian music’s phenomenal global rise.

Hour One of Rise Up explores the period when CDs replace cassette tapes and synthesized sounds fill the airwaves. Videos define music in the Eighties. With the arrival of MTV in America and, later, MuchMusic and MusiquePlus in Canada, artists suddenly have access to a powerful new marketing medium. They still have to write good songs and perform well, but now it really helps to also have good hair and wardrobe—and to be able to play to the camera. The whole package means that the most photogenic musicians, from Corey Hart to Dalbello, gain widespread exposure coast to coast through the power of television.

Gowan, whose video for “A Criminal Mind,” set high standards for the new medium, speaks candidly in Rise Up about the revolutionary change brought on by videos. “Since everyone got a TV-sized stage to present themselves to the world,” says Gowan, “in some ways it kind of leveled everything really quickly.” Denise Donlon, then of MuchMusic, recalls the wild frontier and openness of the broadcast landscape at the time. “Playing a Platinum Blonde video next to a Jane Siberry video next to a Bruce Cockburn video next to a Loverboy video—that just doesn’t happen anymore,” she marvels.

Meanwhile, bands like the Payola$ and the Parachute Club, drawing on styles as diverse as reggae, soca and calypso, shake up the airwaves with such rhythmic hits as “Eyes of a Stranger” and the era-defining anthem “Rise Up.”

The biggest star in the Canadian pop pantheon of the ’80s is Bryan Adams. On Canada’s West Coast, no one can make musical careers skyrocket faster than Bruce Allen, who does exactly that for the determined kid from Vancouver. Teaming up with music veteran Jim Vallance, Adams forms a songwriting partnership that becomes a virtual hit-making machine. As alt-country songstress Kathleen Edwards describes Adams it: “Here’s a guy who works his ass off. The man has earned his keep.”

By the middle of the decade, Canadian music is clearly on the rise. Hour Two of Rise Up details how far Canada’s artists have grown in the second half of the 1980s, with singer-songwriters, synth-pop groups and hard-rock bands all topping the charts. Videos are the new fast track to fame, as homegrown artists like Robbie Robertson and Alannah Myles score global hits in record numbers. The late ’80s also sees the rise of some diverse new sounds, including the alternative country of Blue Rodeo and Cowboy Junkies and hip hop pioneers such as Maestro and Michie Mee. And the decade also produces vibrant guitar heroes and a new wave of potent pop divas.

Timeless, evocative, diverse and multi-layered, Canadian music in the Eighties grows to unprecedented heights. Videos have given wide exposure to a growing number of acts …and made it easier for them to tour from coast to coast. Never before has Canada produced as many international stars, from Leonard Cohen, Daniel Lanois and Neil Young to Chilliwack, Red Rider and Glass Tiger. The stage is set for the explosive Nineties, which erupts with the Tragically Hip, the Canrock indie revolution and a global takeover by the country’s top pop divas. By the end of the Eighties, Canadian music is clearly…on the rise.