TV Documentary: This Beat Goes On - Canadian Pop Music in the 1970s 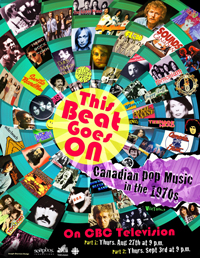 The 1970s gave us bell bottoms, shag hair and shag carpeting a whole lotta great music…from glam and progressive rock to punk and reggae. This Beat Goes On offers a jukebox full of chart-topping songs, from “Sundown,” Gordon Lightfoot’s confessional tale of infidelity,” to Trooper’s rambunctious party anthem “Raise a Little Hell,” to showcase the rapid growth of the Canadian sound.

Mixing archival footage with candid interviews from top artists and industry heavyweights, Hour One focuses on the formative years of Canada’s music scene, a time of proven hitmakers like Anne Murray, Neil Young, Joni Mitchell and The Guess Who. The decade starts out on a controversial note, as a government ruling forces radio stations to play 30 per cent Canadian content, or CanCon. “That was the biggest problem,” DJ Red Robinson believes, “that arbitrary 30 per cent. I think it should’ve started at 10 or 15 per cent and then let it grow.”

But the ruling soon starts paying dividends, laying the groundwork for bands like April Wine, studios like Little Mountain Sound, managers like Bruce Allen and labels like Aquarius, Daffodil and Mushroom. Says Aquarius owner Donald Tarlton: “Legislated radio delivered the incredible rock-and-roll era that was the ’70s.” Meanwhile, the newly launched Juno Awards creates a much-needed star system. By the middle of the decade, Canadian music is primed for the Big Band and rocking from coast to coast, with folksingers, blues artists and mullet-rockers like Prism and Bachman-Turner Overdrive.

In Hour Two of This Beat Goes On, the hits just keep coming, from Burton Cummings’ soaring soft-rock ballad “Stand Tall” to Loverboy’s frenetic arena-rock anthem “Turn Me Loose.” The program documents Canadian music’s international breakthrough in the latter half of 1970s. Solo artists like Joni Mitchell and progressive rockers such as Rush still rule, but the era is also a time of shaved heads and skinny ties, as punk and new wave artists from D.O.A. and the Viletones to the Pointed Sticks and the Kings, who land themselves on Dick Clark’s American Bandstand with their doubled-sided single “This Beat Goes On/Switchin’ to Glide,” push their way into the spotlight. There are also the fresh new sounds of reggae and Celtic music coming into the mainstream for the first time.

The Seventies is the decade of disco, hard rock and heavy metal, but it’s also an era of gentler, ear-pleasing balladry. And Canada, blessed with a surplus of talented songwriters, gives the world some of its biggest soft-rock hits, including Dan Hill’s “Sometimes When We Touch” and Gino Vannelli’s number-one worldwide classic “I Just Wanna Stop,” which jacksoul’s Haydain Neale says “everyone loves,” whether it’s “black people, white people, or people from Micronesia with grass skirts.”

By the end of the decade, the Can-rock revolution has arrived. Canada has become a major player on the world stage, with studios, record producers and a host of agents, promoters and managers. With better studios come better sound, airplay and made-in-Canada albums that can proudly stand alongside international discs. A national tour circuit means that Canadian artists can tour from coast to coast and build a viable career at home. There is even a star system…thanks to the showcase of the Juno Awards. With concert material and interview footage, This Beat Goes On presents the wealth of music that sprang from the Great White North, from the Good Brothers to the McGarrigle Sisters and from B.T.O. to D.O.A. The beat of Canadian music has never been stronger.

Tweet
Tags:
music history
Before the Gold Rush - Flashbacks to the Dawn of t...
TV Documentary: Rise Up - Canadian Pop Music in th...