This is an entertaining, authoritative, and highly anecdotal look at the golden era of Canadian pop music-the historically important decade that gave birth to such internationally respected recording artists as Neil Young, Joni Mitchell, Ian & Sylvia Tyson, Gordon Lightfoot, Murray McLauchlan, Bruce Cockburn, Buffy Saint Marie, Blood, Sweat & Tears, and Ronnie Hawkins. In the bohemian sixties, Toronto's Yorkville neighbourhood was a hippie haven-our version of Haight-Ashbury or Greenwich Village, a place where coffeehouses like the Riverboat and the Purple Onion offered a creative mecca for musicians from across Canada. They came from Saskatoon and Winnipeg, from Vancouver and Edmonton and Halifax. By the middle of the sixties, they had forged an adventurous, original sound that the American music press proclaimed "a fresh wind from the north." It was Canadian music's first wave of international success. In researching the book, Jennings conducted more than 100 interviews with musicians, managers, club owners, booking agents, and record company executives including Gordon Lightfoot, Murray McLauchlan, Bruce Cockburn, among many others. Many of those he's interviewed have provided the author with period photographs and other memorabilia for reproduction in this book.

"Beginning with Ian & Sylvia, the narrative runs like a train, picking up passengers one by one, tracking their interrelationships, creating an underlying sense of accumulation and momentum."

"Jennings' wonderful study of the formative years of a Canadian folk, pop, and rock sound is an invaluable addition to our understanding of our musical heritage, popular culture, and political history."

"A lavishly illustrated, entertaining look at Yorkville's vibrant music scene of the '60s, the birthplace of Canadian pop."

"The strength of the book is anecdotal. Who knew that Gordon Lightfoot was one of Tommy Hunter's Singin' Swingin' Eight, where his deficiencies as a dancer earned him the nickname Gord Leadfoot? Or that David Clayton-Thomas spent time in prison before embarking on his singing career, when he had a much tougher sound than he later did with Blood, Sweat and Tears? The trivia buffs will find many a tidbit."

"At times, it's like stumbling into a parallel universe where acts like The Dirty Shames, The Paupers, Luke & the Apostles and The Ugly Ducklings take on immense significance. Along the way, there are some weird and wonderful stories with future millionaire performers washing dishes, hustling gigs, immersing themselves in the boho subculture and dreaming of unlikely fame. Jennings' crisp prose style, coupled with his encyclopedic knowledge of the scene and enviable ability to transform a thousand tales into a coherent and often riveting history makes this a treasure trove for source hunters and casual purchasers alike." 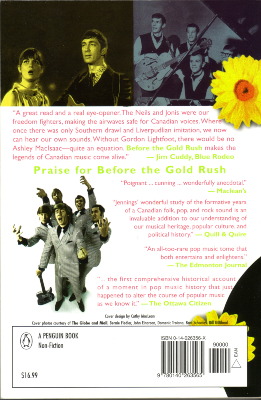 ♦ This book is an exceptional framework for understanding the evolution of the Canadian music industry. It covers in detail fascinating stories of euphoric success and sad tales of bitter disappointment and misguided adventures. It personalizes the performers, the writers, and gives credence and value to the emerging technology and it's warp speed changes. It discusses and compartmentalizes the interrelationships between many of our musical stars, how they connected, the collective path they followed on their journey and the serendipitous occurrences that led them to success or obscurity at given times during their musical chronology. This book is a valuable resource for performers , an encyclopedia of fact for musical historians , and contains a plethora of enlightening detail for musical trivia buffs. It justifies and solidifies Canada's place as a legitimate and prolific creator of classic musical material that is to be appreciated by generations of listeners, for years to come.

♦ I had the extraordinary good fortune to spend parts of four summers (1964-1967) in Yorkville, which was a long train ride from my home on the Central Coast of California. At the time I was in my late teens. I was attracted to Canada by recordings I had heard of Ian & Sylvia and Buffy Sainte-Marie, but when I arrived in Toronto, I was captivated by all the rock'n'roll bands that had been inspired by the Beatles, as well as more permanent fixtures like the Hawks and Luke & the Apostles. I'd planned to visit for a week and stayed for a month. If my father hadn't threatened to come and get me, I might have stayed. The other three summers I arranged to get work in and around town (which wasn't always easy for an American visitor) just so I'd have enough money to go clubbing. Back in California, I went to the Haight-Ashbury and other parts of the San Francisco scene, and I got down to the Sunset Strip in Los Angeles every once in a while, but I always felt that Yorkville was the real deal. Jannings' book is the perfect recollection of the times. His stories of the musicians and their managers are spot-on. The only thing I would have wished for was more coverage of the fans -- all you really get in this book are general comments and a few tidbits about Cathy Smith, the professional groupie. They say that if you remember the Sixties, you weren't really there, but my experience of Yorkville wasn't like that. I remember the hard-driving sound that characterized the bands of eastern Canada, and Jennings has definitely captured that spirit in this book.

♦ Nicholas Jennings is the first author to write an entire book devoted to the Toronto music scene of the 1960's. He follows the making of the Toronto Sound, starting with the folk movement, through rhythm and blues, touches on garage bands and the jazz/country/rock/soul sounds which defined Yorkville music in the late 60's. The volumes of information imparted are astounding, and the story is very interesting, especially for those with an interest in the Sunset Strip, Bay area, Soho and Greenwhich village happenings. Jennings keeps the book flowing by using a time-line style, and manages to throw some of the more obscure names in the Toronto scene around. I highly recommend this book to anyone with a fascination for the music of the 60's, and I urge Jennings to keep on writing his fantastic books!

♦ After reading this author’s biography on Gordon Lightfoot I was eager for another offering, this one a more comprehensive view of the Canadian folk and folk rock scene. Interesting to learn important details especially how it has impacted the music scene in the US, that most of us are more familiar with.

♦ Excellent, well-researched book about the folk and rock scene in Toronto in the 60s and early 70s.