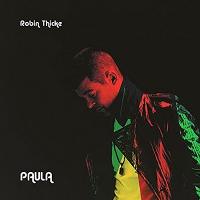 Breakup albums are a mainstay of pop music, from Marvin Gaye’s Here, My Dear to Amy Winehouse’s Back to Black. The “Blurred Lines” singer latest disc certainly fits the mold, detailing as it does his estrangement from actress-wife Paula Patton. What’s different about Thicke’s album is just how far he goes in apologizing for his marital misdemeanors and begging for Patton’s return. “I’m sorry you had to suffer my lack of self-control,” he sings on “Still Madly Deeply.” “Pretty, pretty please come home to me,” he implores on “You’re My Fantasy.” On the spare funk of “Black Tar Cloud,” he even admits to being “face down in a puddle of shame” and “desperately crying for help.” Musically, the album has its moments, from the r&b swagger of “Whatever I Want” to the sexy soul of “Love Can Grow Back.” But the latter backfires when he sings what sounds like a reference to his Miley Cyrus twerking controversy: “You’re way too young to dance like that in front of a man like me, babe.” Like the rest of the album and his disastrous #AskThicke Twitter campaign, Thicke winds up shooting himself in the foot.