Rod Stewart - Fly Me to the Moon: Great American Songbook 5 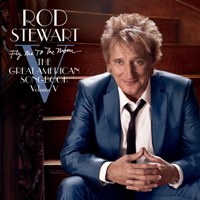 Rod Stewart is known for many things: his raspy voice, his rooster hairdo and his many supermodel girlfriends and wives. A rock-and-roll legend, he’s become famous in the past decade as a pop crooner. The Scottish-born singer’s transformation happened fortuitously, after being unceremoniously dumped by his longtime record label. Music mogul Clive Davis revived the rocker’s career, guessing that Stewart’s distinctive voice and old pop standards would make perfect dinner-party music.

Davis was right: Stewart’s Great American Songbook series, including the albums It Had to Be You, As Time Goes By, Stardust and Thanks for the Memory, has become the best-selling series of new music recordings in history and earned Stewart his first Grammy Award, for best pop vocal album, in 2005. Now Stewart is releasing his last album in the series, Fly Me to the Moon. “This is fifth and final one,” he insists. “I’ll be sad to see them go, but I don’t want to do any more after this one. I want to do a blues album, a country album and I may record again with (guitarist and former bandmate) Jeff Beck.”

Fly Me to the Moon is a fitting finale. With swinging renditions of chestnuts like Cole Porter’s “I Get a Kick Out of You” and “I’ve Got You Under My Skin,” it’s his most upbeat yet. The one exception is the languid “Moon River,” which apparently brought Stewart’s wife Penny Lancaster to tears when she heard it. Stewart’s fans may shed a few tears themselves.