Rune Halland, of Oslo’s Cruisin’ Records, caught the music bug—you could say a case of rockin’ pneumonia and the boogie-woogie flu—at an early age. At 22, the university student made a pilgrimage all the way to New Orleans, the cradle of jazz and the home of rhythm & blues greats like Fats Domino, Professor Longhair and Allen Toussaint.

While in the Big Easy, Halland heard that his hellcat hero Jerry Lee Lewis was performing in Detroit. He excitedly bought a bus ticket and headed north, only to find when he arrived in the Motor City, after an arduous 30-hour-long journey, that the Killer had cancelled. What to do?

After wandering the mean streets of Detroit, in predominantly black neighbourhoods where he now says he felt surprisingly safe, Halland decided to visit Niagara Falls. He then learned that Elvis Presley was scheduled to perform a sold-out concert on the American side. But how to get in?

As luck would have it, Halland bumped into a busload of Canadian fans and discovered they had a pair of available tickets, as two of the passengers had forgotten their passports. He bought both tickets, sold one for a tidy profit and got to see the King of Rock ’n’ Roll. And while the concert was disappointing (“Presley was well past his prime at that point,” Halland recalls), the teenager knew he’d found his calling. 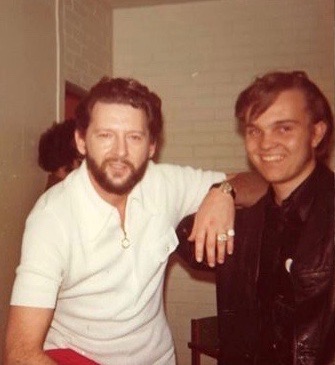 Back in Oslo, Halland became a high school instructor, teaching history and English, but music remained a constant in his life. He juggled his teaching duties with buying and selling records and writing for local music magazines. At 18, he had done his first interview with Jerry Lee Lewis and another with piano bluesman Champion Jack Dupree. He later did interviews with other pioneers, including Bill Haley, Chuck Berry, Carl Perkins and the Everly Brothers (separately, of course) as well as Canada’s Jack Scott and Ronnie Hawkins. And he got to see Lewis perform and interview him again whenever the “Great Balls of Fire” man visited Scandinavia.

Halland’s love of blues, country, rock ’n’ roll, rhythm & blues and rockabilly led him to give up teaching, open a record store and split his time between working as a music journalist and as a DJ on the Norwegian National Broadcasting network, NRK, where he spun oldies and rockbilly records on several radio shows from 1981 to 2000. 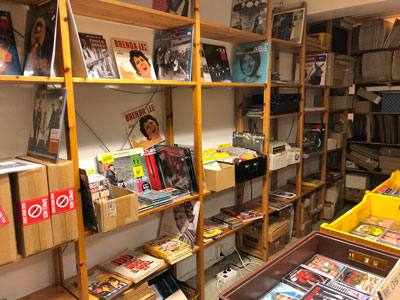 These days, Halland’s time is taken up with running Cruisin’ Records, which he first opened 40 years ago. He’s been in its current location, at the foot of Oslo’s Kongen Gate not far from the city’s Fortress and Resistance Museum, since 2007. It’s not easy to find—in fact, none of his shops have ever had storefronts—but that’s the mark of a specialist outlet that devoted customers seek out.

After buzzing your way in, visitors must walk through a lobby, out a door into a courtyard and then catch an elevator in another building up to the fourth floor. Stepping inside Cruisin’ Records is to enter a record lover’s paradise, shelf after shelf and bin after bin of carefully curated vinyl, CDs and books--everything from American roots music and British Merseybeat to the best Scandinavian music. Halland’s favourite Norwegian artists are bluesman Joakim Tinderholt, country stars the Country Heroes and rockabilly act the Teencats, while he cites some of Norway’s bestsellers as blues musician Vidar Busk and country band the Hellbillies.

With more than 30,000 titles in Cruisin’s online shop, much of Halland’s time these days is taken up with filling mail orders for customers around the world. But a stop at his shop is worth the trip for any visiting music lover and Halland is always happy to spin platters of interest on Cruisin’s stereo system. You might even get him to share one of his wild tales about Jerry Lee Lewis.