The name of the Quebec group means "smiling boot," with the "smile" created by the flapping sole of a well-worn boot. And in La Bottine Souriante's native province, at least, it certainly fits. Over the course of 23 years, the group's members have worn out many pairs of boots and shoes -- both their own and those of their audience -- playing a happy, highly danceable blend of French-Canadian, Cajun and Celtic sounds. Now, with an international recording deal on the Virgin Music label, La Bottine Souriante is set to begin ruining footwear the world over. "We're a party band," singer-accordionist Yves Lambert says proudly after a boisterous show in a large Toronto beer hall that had many in the crowd up on the dance floor. "We get our greatest pleasure from seeing people have fun."

At home in Quebec, where La Bottine is a musical institution, that fun has translated into major success, with sales of nearly half a million recordings and dozens of awards. But the nine-member group has lately been looking beyond its provincial borders. Although the musicians sing exclusively in French, Lambert and his band mates have already become favourites on the international folk-festival circuit. England's Folk Roots magazine recently called them "the tightest and most exciting band of any nature anywhere," while in 1997, the U.S.-based music publication Dirty Linen proclaimed them simply "the best band in the world." With the Virgin deal, which encompasses the group's back catalogue of nine albums, its current album, Dixième, as well as future recordings, La Bottine is being primed for the burgeoning world-music market. "Their potential is huge," says Virgin Canada's Geoff Kulawick, who courted the band for four years before signing them. "We think they could easily be as big as France's Gipsy Kings or Cuba's Buena Vista Social Club." 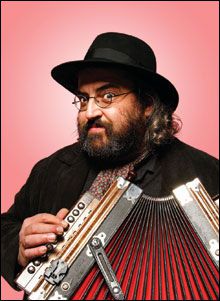 In a hotel café the morning after La Bottine's sweaty Toronto performance, Lambert and bassist Régent Archambault were describing the group's evolution from an earnest quartet in the Lanaudière region, near the Quebec town of Joliette, in 1976. Lambert, 43, a rotund, gregarious man with a walrus moustache and a fondness for fedoras and suspenders, is the only original member left and the band's driving force. The group was born, he recalls in his heavily accented English, at the height of both a folk revival and Quebec's Cultural Revolution. "Back then," he says, "we took our music very seriously and played only traditional tunes on fiddles and accordions. We'd never consider using bass or drums because that wasn't pure." Laughing uproariously, he adds: "We were so serious that we'd all wear lumberjack shirts onstage." Asked if he thinks La Bottine's use of French exclusively could be an impediment to a bigger international profile, Lambert says only half-jokingly: "We in Quebec have always listened to English songs and not understood all the words, so for us to sing in French to English audiences -- it's a good revenge."

The group transformed itself from a hard-core folkloric group in the late '80s by adding a rhythm section and, in 1991, four horn players. Says Archambault, 45, who joined in 1988: "Our pianist, Denis Fréchette, kept saying 'I hear brass in this' whenever we played certain songs in practice. Finally, we tried it and were all astonished. The sound was incredible." The addition of horns broadened La Bottine's range considerably, enabling it to venture into New Orleans swing and even salsa territory. Still, the group remains firmly rooted in traditional Quebec reels and call-and-response songs. And the band's connections with Cajun and Celtic music have put it in touch with its American and Irish counterparts, BeauSoleil and The Chieftains. Next month, La Bottine will appear with BeauSoleil in a PBS special titled Louisiana Rock & Reel.

Performing across Quebec next month, and with an extensive tour of English Canada planned for next summer, La Bottine is gearing up for its global conquest. Lambert, who looks like a portly Frank Zappa, believes his band's collection of Quebec fiddle tunes, absurdist ballads and often bawdy drinking songs is exactly the right ammunition. "People need a band like ours because the world can be a sad place, and most music is very serious," he said. "La Bottine Souriante plays very extroverted music. We try to communicate la joie de vivre."