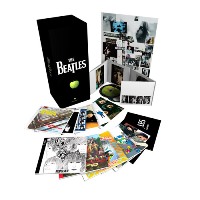 They changed the world and saved a generation from the doldrums of an otherwise drab world. Now, 40 years on, the Beatles are back—and expectations are running high that, once again, all we need is a little love from the world’s most famous rock band. The Beatles’ albums have been digitally remastered, providing the highest fidelity since their original release. At the same time, fans of all ages will now be able to twist and shout to the Fab Four with the The Beatles: Rock Band video game. The spin-off prospects have retailers anticipating a Beatles bonanza.

The band’s catalogue was first re-issued on CD in 1987. The difference in sound quality between then and now is astonishing. Using state-of-the-art technology, engineers have restored the original freshness to the recordings. “It’s not smarter or more sophisticated,” notes Sir Paul McCartney. “It’s just more real—it’s more true to the noise we were actually making.”

The remastered CDs include the 12 original Beatles albums, along with Magical Mystery Tour and Past Masters, all featuring original and newly written liner notes and rare photos. These are available separately or together with a DVD collection of documentaries about the albums in a stylish package that resembles a black shoebox. To hear the clarity of Paul’s melodic bass playing and the crispness of Ringo’s inventive drumming—not to mention John’s and Paul’s ecstatic harmonies or, say, George’s revolutionary guitar feedback on “I Feel Fine”— is nothing short of revelatory. Prepared to be surprised.

September 2009
Tweet
Tags:
beatles
Blue Rodeo - The Things We Left Behind
Keyshia Cole - A Different Me