The thrilling blues of Luke & the Apostles Starting in the mid-1960s, Luke & the Apostles—a quintet fronted by the Mick Jagger-like Luke Gibson—were packing Yorkville’s Purple Onion night after night. Although guys were drawn to the Apostlesʼ raw covers of songs like “Crossroads,” “Good Morning Little Schoolgirl” and “You Canʼt Judge a Book,” girls were drooling over the sight of Gibson. 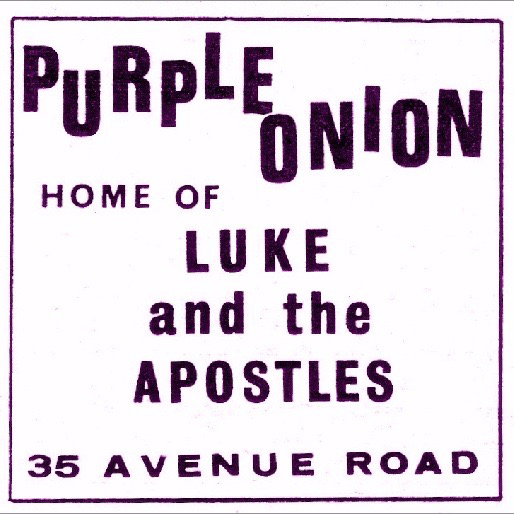 Off-stage, Gibson was shy and quiet, but on-stage, he was transformed into a writhing, shaking, screaming package of pure sexual energy. With his curly hair and boyish good looks, Gibson was the bandʼs biggest asset. But the Apostles—guitarist Mike McKenna, keyboardist Peter Jermyn, bassist Jim Jones and drummer Rich McMurray—sounded good enough to Paul Rothchild of New Yorkʼs Elektra Records, the talent scout who later discovered the Doors. 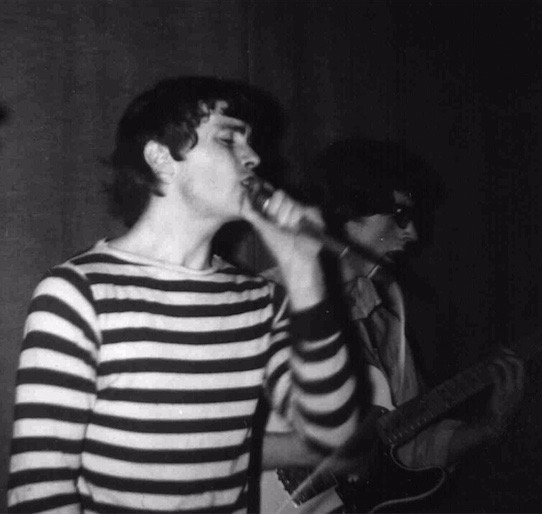 In the midst of the bandʼs year-long stand at the Onion, Rothchild arrived in Toronto to check out what heʼd heard was a happening music scene. After catching one set by Luke & the Apostles, he instantly wanted to sign them. The next day, the talent scout showed up at the bandʼs rehearsal at the Onion and asked them to play while he telephoned his boss, Jac Holzman. “We started doing our own song, ʻBeen Burnt,ʼ” recalls Gibson, “and Paul hands me the phone and tells me to sing. Thatʼs how we auditioned.”

The deal took Gibson and the group to New York where they recorded both “Been Burnt,” a driving, incendiary number, and McKennaʼs “Donʼt Know Why.” But in a cruel twist of fate—and a sign of the times—the recordʼs release was put on hold for over a year while Rothchild served a prison sentence for marijuana possession. Luke & the Apostles then became victims of record company politics and were eventually dropped, leaving a recording legacy of just one classic single.

Along with the Paupers and the Ugly Ducklings, Luke & the Apostles were part of an explosion of new bands that filled Toronto’s bar and coffeehouse circuit in 1966. There were more than 1,400 rock bands in the city that year, 400 of them earning musiciansʼ union scale. Despite the fact that Toronto had only a handful of studios at the time, those groups produced over 200 recorded singles in 1966 alone. Promoter Ron Scribner described Toronto that year as “the New Orleans of rock and roll,” while Bob McAdorey, musical director of CHUM, went even further: “Itʼs just like Liverpool before the Beatles made it.”

All the musical activity led to a catchphrase to describe the new sound coming out of Toronto. Obviously borrowed from the Mersey Sound or the Motown Sound, the term “the Toronto Sound” was applied to the myriad bands performing on Yonge Street and in Yorkville. Observers noted several distinctive characteristics to the sound—including a raunchy Telecaster guitar and a droning Hammond B3 organ. “Itʼs kind of whiny,” suggested Luke Gibson, whose band many thought epitomized the Toronto Sound, “a real screamingly dirty sound. Just about every lead guitar player plays that way.” To Chuck Beal, the Paupers’ lead guitarist, it was volume that set Toronto bands apart. “They all play louder, harder and with a more driving beat,” he said. “Most U.S. groups seem soft compared to us.” 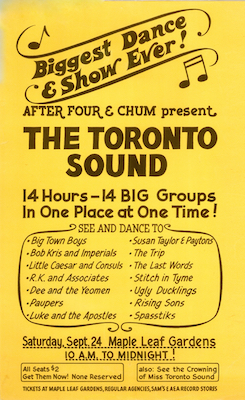 Which contributed more to the Toronto Sound: Yorkville or Yonge Street? To the Mandalaʼs Domenic Troiano, Yonge Street influenced Yorkville. But to Beal, it was Yorkville that contributed most to the explosion of Canadian music. “Yorkville, with its many clubs, gives a lot of bands a chance to work six nights a week,” Beal observed. “It makes them compete every night against the band next door for the crowds. But itʼs not just the competition,” he added. “The whole atmosphere, the whole way of life, the mood in Yorkville is so great. Weʼve turned down jobs offering two and three times as much just to play there.”

The Toronto Sound came to Maple Leaf Gardens in September, 1966, with a massive concert sponsored by CHUM radio and the Toronto Telegramʼs popular “After Four” section. The homegrown extravaganza (“14 Hours—14 Big Groups in One Place at One Time!” read the posters) featured established acts like the Paupers, the Ugly Ducklings and Luke & the Apostles as well as such up-and-coming bands as the Spasstiks, the Last Words and the Trip. The concert sold out and thousands of teenage girls were suddenly screaming for local bands the way they had for the Beatles and the Rolling Stones. The Toronto Sound show put the city on the map in the eyes of the American record industry, which sent along its top talent scouts.

In July the following year, psychedelic-rock came to Canada on the wings of Jefferson Airplane. Flying high with its Surrealistic Pillow album and its edgy, cinematic hits “Somebody to Love” and “White Rabbit,” the Airplane arrived in Toronto on July 23 to perform a free outdoor show at Nathan Phillips Square, and a week-long gig at the OʼKeefe Centre with the Grateful Dead.

More than 50,000 attended the outdoor concert. Some who did remember it as the day the old Toronto Sound died, as the love affair with r & b was replaced by the kaleidoscopic sounds of acid-rock. It was a glorious happening, full of sunshine, dancing and general grooviness. Joints were passed, munchies shared and everyone basked in the freaky sounds coming from the stage. Luke & the Apostles opened the show and came away with an enviable invitation: U.S. promoter Bill Graham, who’d first encountered the Toronto band from the time it opened for the Dead at New York’s Café au Go Go, now asked the group to join the Airplane’s and Dead’s upcoming gigs at the OʼKeefe. 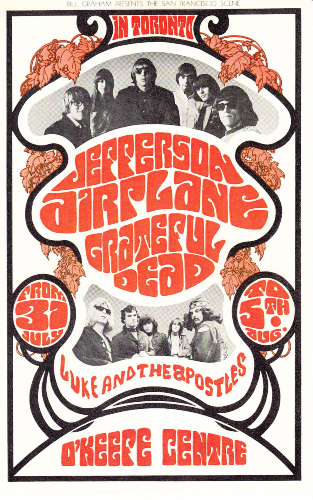 The OʼKeefe concerts took place from July 31 to August 5. Each band would perform atop a platform on wheels; when the curtains opened, stagehands would push the platform out just as the musicians struck their first chords. On opening night, Gibson and his group had a bad case of the jitters. Just before they were to go on, Graham visited them in their dressing room. “OK, gentlemen,” he told the group, “as youʼre being pushed out tonight, I want you to urinate towards the audience.” There was a momentary silence as the Apostles looked at the mercurial promoter and then each other. “We broke out laughing when we realized he was kidding,” says Gibson. “He was trying to loosen us up, and it worked.” 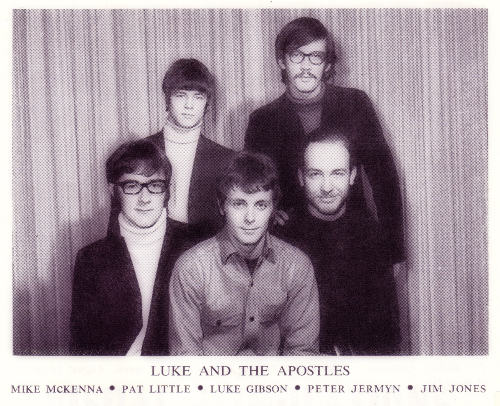 Gibson and his bandmates hit the stage and launched into their bluesy version of Neil Young's “Mr. Soul,” as well as “Good Morning Little School Girl” and “Can't Judge A Book,” the popular standards in their repertoire. The audience loved them. Many who witnessed those shows today recall how the Toronto band stole the show and how its tightness and superior musicianship made the Dead and Airplane sound disorganized and unfocussed. So much for the much-ballyhooed San Francisco scene.

In a few short years, Luke & the Apostles had made their mark and are today fondly remembered as an integral part of the Toronto Sound—that wave of exceptional bands that during the latter part of the 1960s rivalled the musical output of any of the world’s great entertainment capitals. No wonder Elektra Record’s Paul Rothchild referred to the band as “the greatest album I never got to make.”

Adapted from Before the Gold Rush: Flashbacks to the Dawn of the Canadian Sound by Nicholas Jennings. Originally published in 1997 by Penguin Books.