Gould Street, where it is the only surviving 19th century commercial building along the east side of Yonge Street in the block between Dundas Street East and Gould Street. With its position on a corner lot and visible tower, the Empress Hotel stands as a reminder of the grandeur of Yonge Street as it developed in the late 19th and early 20th centuries as Toronto's "main street."

Not commonly known is the building's cultural significance to Toronto's music scene. According to music historian Nicholas Jennings, as the Edison Hotel the building presented top entertainment through the 1950s and '60s, as part of an entertainment circuit on the Yonge Street Strip that included such venues as Le Coq D'Or (333 Yonge, now HMV) and Friar's Tavern (283 Yonge, now Hard Rock Cafe). 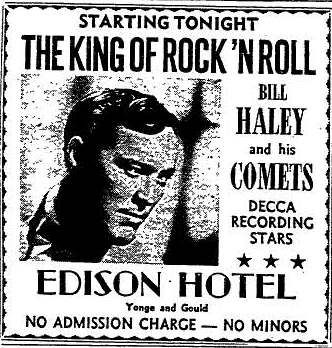 The Edison featured such legendary performers as Bill Haley, Bo Diddley, Carl Perkins, the Everly Brothers and Cab Calloway over the years. Quite apart from the building's impressive architectural value, the site played a significant role in the history of live entertainment in Toronto, as one of the city's top venues.

In order for other heritage buildings such as the Empress Hotel to not disappear in future:

Ultimately, of course, the responsibility to properly preserve and ensure the safe condition of heritage buildings rests with the building owners.