"We got tired of playing uptown to just community groups and in community centres," recalls Mojah. "I, for one, always wanted to move out into the mainstream. So I set out on a path of coming down to Queen Street in Toronto and visiting some of the local bands in the area. That's where I met up with people like (bassist) Terry Wilkins, who played with Carole Pope in a band called Rough Trade. I also met (drummer) Billy Bryans, who used to drum with a group called the Bopcats. There was a cowboy living at the Cameron House called Handsome Ned. We got together and created a fusion of reggae and country & western that we called rastabilly."

Truths & Rights performed in Toronto clubs like the Edge, the Horseshoe Tavern and the 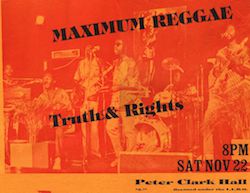 Palais Royale. The group played at Toronto's Caribana celebrations in 1980, opening for Jamaica's Dennis Brown and Third World, and opened for the English Beat at the Concert Hall. It also toured across Ontario, performing in Kingston and Ottawa. Determined to introduce reggae music further afield, Truths & Rights also regularly ventured into Quebec, performing in Quebec City and in clubs like the Rising Sun in Montreal, where they developed a strong fan following."We're trying to gain national acceptance for (reggae)," Ovid said at the time. "Reggae is still looked upon as tropical music. It's the same thing with calypso. It's not as accepted as rock." 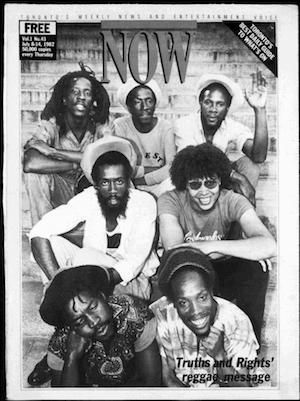 But Truths & Rights broke through to a wider audience through constantly touring and a well-produced sound. Songs like its 1980 single "Acid Rain" tackled a critical environmental issue of the day, while 1981's "Metro's No. 1 Problem" explored issues of racism and police brutality. Both songs received airplay on CBC and Toronto's Q107, which featured "Acid Rain" on the radio station's Homegrown Album. "We're described as 'political,'" acknowledged Chico in 1982, "but our politics are never based on any decision to write 'political' music. We're just communicating our life as we live it, giving back the experience of the culture that is around us. We see problems and we write about them, whether it's the nuclear arms increase or acid rain, and that's the tradition of reggae: to comment on what goes on around you." 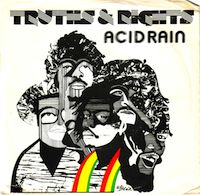 The Toronto Star named Truths & Rights as Toronto's Band of the Year in 1983. The band also spawned several offshoots, including groups such as Le Dub Sac and I an I. And its legacy lived on through the Trinidadian-born Mojah's role in fusion groups such as V, which led to the groundbreaking, Juno Award-winning Parachute Club (which included Bryans) and the calypso-based big band Compass (which included Wilkins). More recently, Mojah influenced singer-guitarist Gordie Johnson in his rock-reggae outfit Big Sugar, with bassist Gary Lowe, and their radio hit "Turn the Lights On." Ultimately, Johnson recruited Mojah to play with him in Big Sugar's Alkaline side project, touring all over Canada and the United States. Truths & Rights were true musical pioneers, bringing reggae's infectious rhythms and politically conscious lyrics to Canadian audiences.