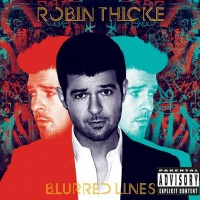 Outside of Daft Punk’s “Get Lucky,” there is no single this summer as hot as the title track from this r&b star’s sixth studio album. Over a funky beat, Robin Thicke’s falsetto alternates with Pharrell’s squeals to create an irresistible sound. The song and a video featuring topless models have sparked criticism, to which Thicke has replied, “If my videos are sexist, then so are the paintings at the Louvre.” Questionable lyrics and video aside, the song is swaggering dance-pop at its best and has topped charts in 17 countries for good reason. While nothing else on the album quite matches the can’t-miss quality of “Blurred Lines,” Thicke, the American-born son of Canadian actor Alan Thicke, shows his propensity for bedroom crooning (not to mention fondness for texting language) on tracks like “Give It 2 U” and “Go Stupid 4 U.” Flirting with controversy and Justin Timberlake-style smooth soul, Thicke has found his groove.