Various artists - The Art of McCartney 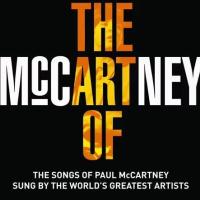 There have been many Beatles tributes. This one stands out for its vast range of major artists covering songs by McCartneyl, who ranks alongside Cole Porter and George Gershwin as the most successful composer of all time. “Yesterday” is the world’s most covered song, with over 2,200 versions. It’s sung here, with accordion backing, by Willie Nelson. Among the other 41 tracks are two contributions each from Heart, Billy Joel, Steve Miller and Alice Cooper. There are also fine renditions of “Helter Skelter” by Roger Daltry, “Let It Be” by Chrissie Hynde and “Things We Said Today” by Bob Dylan. Ronnie Spector and Darlene Love sing early classics, while Wanda Jackson tackles Sir Paul’s Chuck Berry-style romp “Run Devil Run.” But, along with Jeff Lynne’s moving “Junk” and Cheap Trick’s roaring “Jet,” there is nothing more stirring than Brian Wilson’s majestic “Wanderlust,” a Beach Boy’s heartfelt homage to a prolific Beatle.