Various artists - The Hunger Games: Songs from District 12 and Beyond 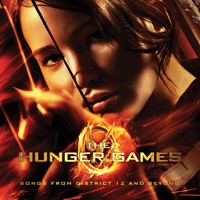 One of the most striking sights at this year’s Grammys was a banjo-playing Taylor Swift, wearing a baggy light-pink dress and her hair tied up in a loose braid. She looked like a loveable hillbilly gal—and drew a standing ovation for her rootsy performance. Now, the award-winning songstress offers two equally striking contributions to the T-Bone Burnett-produced soundtrack for The Hunger Games, the highly anticipated fantasy film starring Jennifer Lawrence.

Swift teams up with folk duo the Civil Wars on the hushed ballad “Safe & Sound” and then abandons the haunting mountain sound for her frenzied rocker “Eyes Open.” Taylor’s songs are stunning and could not be more different. Among the many other highlights of the soundtrack, which also features songs by Maroon 5, Neko Case, Oscar-winner Glen Hansard and others, are “One Engine,” a driving folk-rocker by the Decemberists and “Abraham’s Daughter,” a dark, otherworldly number by Arcade Fire.