When one of Africa’s most celebrated musicians receives visitors at his home in the Nigerian capital of Lagos, he lounges in little more than a striped bathing suit, which tends to slip down in the back. But when Fela Anikulapo Kuti jumps on stage to perform, his costume is a study in flamboyance. He wears a blue jump suit and pants embroidered with saxophones. His act is equally colorful. He sways his saxophone and waves his arms to keep his 27 musicians in line. Between blasts of his multicolored sax, Fela sings in pidgin English the provocative lyrics that have aroused the ire of the military government of his native Nigeria—and which have won him the title of the Afrobeat King, as critics have called him, as well as the praise of a growing number of music lovers around the world.

Fela’s following in North America is still limited but increasing. The musician first became known because of his influence on the work of many popular Western musicians. His unique blend of music, interlaced with repetitious rhythms, has inspired singer Jimmy Cliff and David Byrne, leader of the American group Talking Heads. And with the recent recording success of his fellow Nigerian performer, King Sunny Adé, many pop music experts expect that Western audiences will appreciate Fela’s performances when he arrives in North America next month for a major tour that will include expected shows in Toronto and Montreal.

Fela is as controversial offstage as he is on. The flamboyant 47-year-old, who once married 27 wives—all in a single ceremony—has often been at odds with Nigeria’s military and civilian governments. In 1984, he was arrested for contravening Nigerian foreign currency regulations as he was leaving for an American tour. After he served 19 months, his five-year sentence was cut short last April by members of a new armed forces junta that overthrew the previous military government in an August, 1985 coup. Still, when he appeared on stage in Lagos in early September, his first appearance in his native country since being released, he began taunting the nation’s new rulers. Prancing before his fans, Fela chanted: “Basket mouth done start to leak again.” 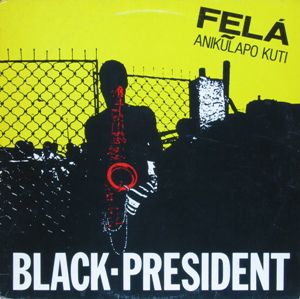 Fela studs his performances with preachings about government corruption, imperialism and social injustice. Indeed, many of his songs are strong, although eccentric, polemics extolling a vague concept of pan-Africanism, or continental socialism. “I have a loose tongue, an extensively loose tongue, Fela told Maclean’s. In more than 60 recordings, he lashes out against government abuses of freedom, and demands that Africans ‘think for themselves.’

The son of a respected Nigerian educator, Fela attended the Trinity College of Music in the late 1950s and early 1960s. While studying in Britain, he heard for the first time the music of American jazz performers John Coltrane and Miles Davis. When he returned to Nigeria in 1963, he abandoned a brief broadcasting career to take up music. He developed a hybrid style of performing that combined American jazz influences with African music, creating a dense and hypnotic style now known as Afrobeat. After meeting black civil rights activists during a trip to the United States in 1969, he became a fierce support of black nationalism. His mother, Funmilayo, one of Nigeria’s most outspoken feminists, who fought successfully for female suffrage, also influenced his thinking. In 1977, police fatally injured her by tossing her out of a second-floor window during a raid, ostensibly to search for illegal drugs in Fela’s home. Outraged, Fela dumped her coffin at the residence of then-president Gen. Olusegun Obasanjo.

Although Fela’s two brothers are senior members of Nigeria’s ruling elite, they continue to provide emotional and sometimes financial support for the musician activist. His brother Koye is Nigeria’s health minister and a renowned advocate of primary health care. His other brother, Beko, is a vice-president of the Nigerian Medical Association. Fela’s only sister, Oludalupo, is a nurse. She describes Koye as a “soft-spoken gentleman,” Beko as a “diplomat” and Fela as a “ya ya yo yo, a noisemaker who is fighting for the masses.”

While his political beliefs are vague, Fela espouses them with a religious fervor. He calls himself a “chief priest,” and he named the Lagos nightclub that he owns “The Shrine.” Fela said that his imprisonment enabled him to reflect on such institutions as marriage, which he now rejects, adding that it “makes me want to vomit.” He says that marriage causes jealousy and possessiveness. According to friends, his wives fought endlessly for his time when he was at home. Recalled one of his fellow musicians: “Bottles used to fly in Fela’s house.” Twenty of his 27 wives—who collectively bore six children—deserted him for other men.

His reputation for riotous living has led some Nigerians to reject Fela’s message and music. Some hotel owners have refused to provide accommodation for his large group, Egypt 80, because of the band’s reputation for using drugs, stealing hotel property and damaging rooms. But Fela says that recently he has reformed. Now, before leaving on tours, he gives his group a stern fatherly talk about avoiding “smack” (heroin). Although Fela says that he does not use hard drugs and only rarely drinks alcohol (when he wants to be “stupid”), he admits to enjoying marijuana, which he describes as “very spiritual.”

Similarly, some Nigerians say that they do not take Fela’s politics seriously, suggesting that he is more eager to garner attention than to initiate reforms. But among Nigeria’s growing ranks of unemployed, oppressed or simply cynical, Fela remains attractive. His disciples often recount a story of how a band of criminals recently attacked Fela’s bus while his group was on tour in a crime-ridden Nigerian state during the mid-1970s. The robbers ran away when they saw the musical legend inside. “Why would they want to kill me?” asked Fela with a grin. “I am the only one that understands their plight.”