African-Canadian performers have long faced prejudice and deeply ingrained racial stereotypes within the entertainment world. These six women, singers who sometimes also worked as stage actresses and TV performers, overcame those challenges to become stars in Canada and around the world. The trails they blazed created pathways for other Canadian black female entertainers to follow. 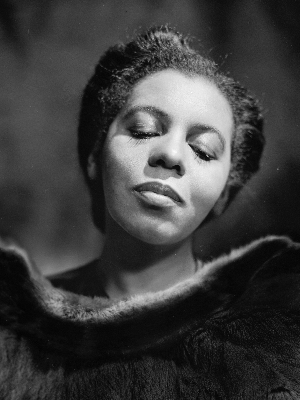 Canada’s first black concert singer to gain international fame, Portia White came from a family steeped in African-Canadian history: her mother was a descendant of Black Loyalists in Nova Scotia, while her father was the son of former slaves from Virginia. Born on June 24, 1911 in Truro, Nova Scotia, she was the third of 13 children who started out in her father’s church choir and won local singing competitions during her teenage years. Unable to afford professional training at first, she studied at Dalhousie University to become a teacher and later taught in Africville and Lucasville, Halifax’s largely black communities. Vocal lessons while teaching led to a scholarship at

the Halifax Conservatory of Music and later singing in concerts and radio shows. White made her national debut as a singer at Toronto’s prestigious Eaton Auditorium, later touring Canada with a repertoire comprised of both classical European music and African-American spirituals. She encountered racism but continued touring, earning rave reviews and comparisons to American contralto Marian Anderson. White’s international debut took place in 1944 at New York’s Town Hall, the first Canadian to perform there, and she was praised by the New York Times. For the new few years, she toured the world, performing in Central and South American and the Caribbean, followed by concerts in France and Switzerland. She retired from public singing in 1952 due to vocal problems and settled in Toronto, where she taught singing to future stars including Lorne Greene Dinah Christie, Don Francks and Robert Goulet. 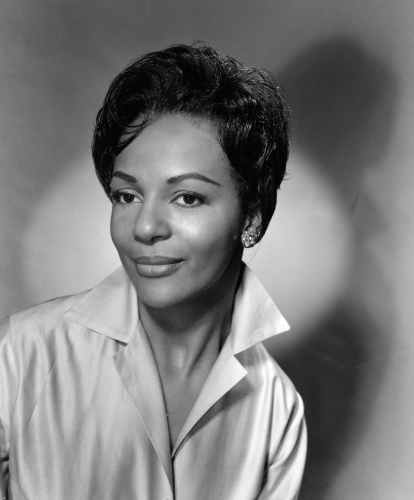 Eleanor Collins was the first female Canadian singer to have her own television show and the first black host on TV in North America. She was born Elnora Ruth Proctor on November 21, 1919 in Edmonton. Her parents had joined hundreds of black homesteaders who migrated north from Oklahoma, responding to the Canadian government’s promotion to settle the prairies. Collins grew up principled and 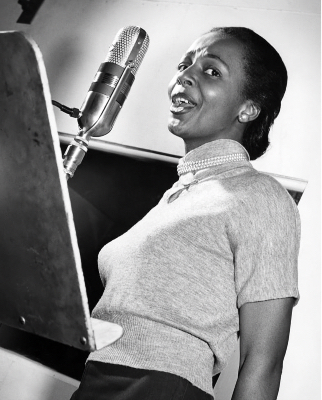 gifted, walking out of her classroom at the age of seven when her teacher made racist remarks about people in Africa and winning a local talent competition at 15. In 1939, Collins moved to Vancouver and sang with the gospel group Swing Low Quartet. After marrying, she and her husband and children moved to Burnaby, the first black family in the neighbourhood, and faced white neighbours petitioning for them to leave. By the 1950s, Collins was recording songs with the Ray Norris Quintet and singing regularly on CBC Radio. But television proved to be her medium and in 1954 she made her debut on Bamboula: A Day in the West Indies, the first Canadian TV show with a mixed-race cast. That same year, Collins hosted her own variety series on CBC titled The Eleanor Show, predating America’s Nat King Cole Show by two years (her show was later reprised as just Eleanor in 1964). Collins continued making appearances on TV, radio and on concert stages, working with the likes of Phil Nimmons, Oscar Peterson and Dizzy Gillespie and earning the title of Vancouver’s First Lady of Jazz. 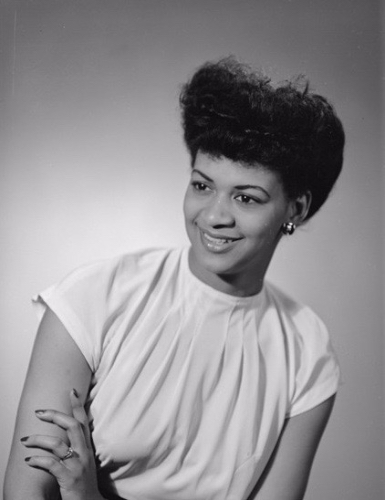 An acclaimed singer, Phyllis Marshall was one of Canada’s earliest TV stars and a pioneer among Canadian black performers. Born in Barrie, Ont. on November 4, 1921, Marshall studied piano as a child but didn’t make her debut singing until she was 15, after her family had moved to Toronto. Discovered by Canadian bandleader Percy Faith, she was soon performing on

CBC Radio. In 1938, Marshall made the news as “the Sophistocat of Song,” singing with Myron Sutton’s Colored Swing Band at Toronto’s Silver Slipper Club. She continued appearing with dance bands and orchestras until 1943, when she opened the Park Plaza Hotel and wound up staying for an 18-month residency. Although Marshall turned down an offer to tour with Fats Waller because of her young age, she did eventually go on the road with Cab Calloway, who said of her, “I’ve never hired a better girl singer. When Phyl does the blues, man, you’re dead.” Marshall admitted she experienced prejudice south of the border. “Being coloured,” she said, “I certainly wouldn’t ever consider living in the United States.” Marshall made frequent appearances on CBC TV variety shows, including Cross Canada Hit Parade and then, in 1959, travelled to England and starred in her own, The Phyllis Marshall Special, on the BBC. Five years later her album That Girl, recorded with jazz stars Buck Clayton and Buddy Tate, was released on the Columbia record label. Marshall later successfully transitioned into acting, appearing on TV series including CBC’s Paul Bernard, Psychiatrist and CTV’s Night Heat. 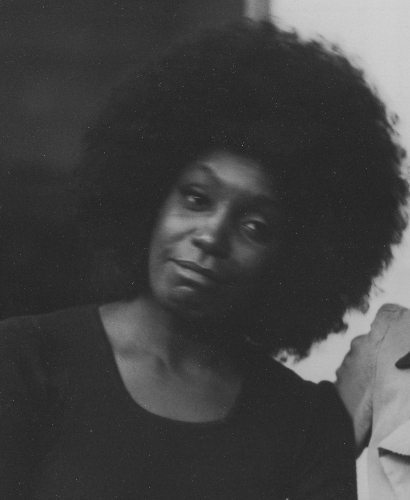 One of the best singers on radio, television and stages from the 1960s until her untimely death in 2005, Dianne Brooks can be rightly called Canada’s Queen of Soul. Born Gwendolyn Dianne Brooks in Newark, New Jersey on January 3, 1939, she started out performing with the Three Playmates in the late 1950s before moving north and settling into Toronto. There she became a fixture of the city’s thriving r&b scene, singing solo and with groups like the Silhouettes and the Soul Searchers, in which she shared vocal duty with Eric Mercury, and appearing on TV’s 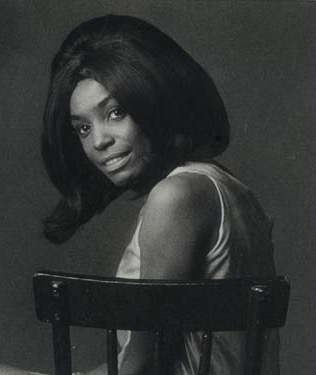 Music Machine. Brooks then ventured to New York and recorded “In My Heart,” a Motown-style single on the Verve Records label, and toured with the Count Basie Orchestra. By the time she recorded her 1969 solo debut album, Another Kind of Soul, featuring the wonderfully funky “Walkin’ On My Mind,” Ray Charles was calling her “the greatest voice I’ve heard since Dinah Washington.” Sadly, Brooks’ recordings made little impact on the charts and she spent the next few years singing with the Dr. Music band and providing backup for everyone from Anne Murray to Funkadelic. Her next album, 1976’s excellent Back Stairs of My Life, mixed r&b with disco. Although the single “Kinky Love/Brown Skin Rose” cracked the Canadian Top 40, the album was largely ignored and the gifted singer resigned herself to mostly nightclub work. Whether on her own recordings or those of so many others, Brooks’ voice remains the epitome of soul. 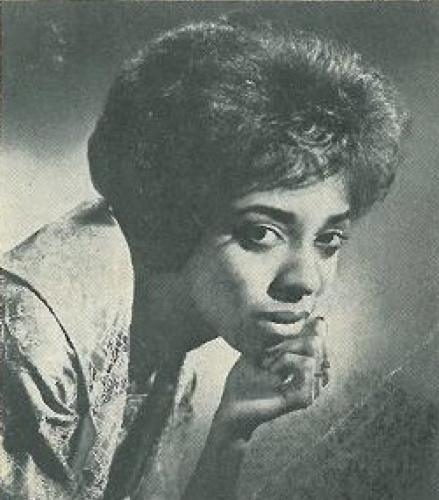 At five, Shirley Matthews was singing solos in her local church; when she was barely out of her teens, she had a million seller on the pop charts. Born Shirley Louis Matthews in tiny Harrow, Ontario on October 4, 1944, the third eldest of 13 children, she grew up idolizing gospel great Mahalia Jackson. After high school, where she excelled at sports, Matthews joined her sister Joyce in Toronto and landed a job as a telephone switchboard operator at Bell Canada. Operator by day, she became a singer by night after Joyce arranged a successful audition at Yonge Street’s Bluenote after-hours club in 1963. There, Matthews was discovered by Bob Crewe, U.S. producer behind the Four Seasons’ hit records, and was whisked off to New York for recording sessions with an 18-piece studio orchestra. By February of the following year, her song “Big Town Boy,” a 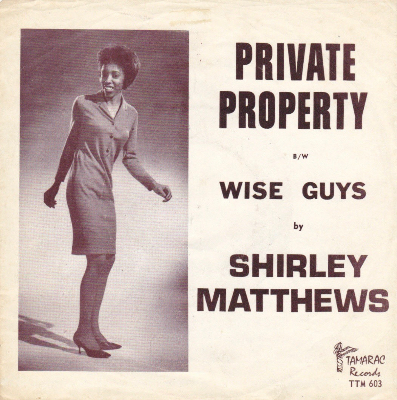 Motown-style number, joined the Beatles in Toronto’s Top 5 charts. Released in the U.S. and Europe on Atlantic Records, “Big Town Boy” led to TV and concert appearances, including opening for Gerry & the Pacemakers at Toronto’s Eaton Auditorium. Riding the wave of pop fame, Matthews won the Gold Leaf Award (forerunner to the Junos) for female vocalist of the year. Singles like “Private Property” and “Stop the Clock” followed and she was cast to play the lead in an all-black version of Cinderella, alongside Phyllis Marshall. Although her music career didn’t last beyond the ’60s and she transitioned into a career running a chain of sport fitness clubs, Matthews had made her mark and her big-town sound today remains an essential part of northern soul. 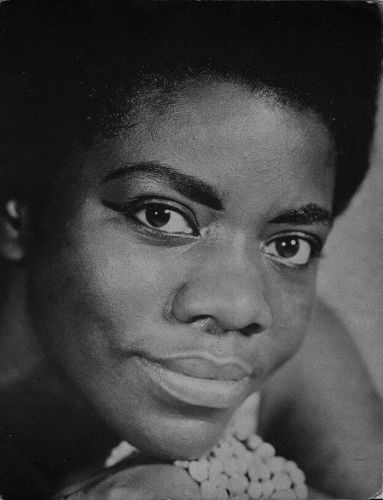 A multi-disciplinary artist who wrote, produced, acted and sang, Salome Bey was Canada’s first lady of the blues. Born in Newark, New Jersey on October 10, 1933, Bey joined her siblings in the jazz-blues trio Andy & the Bey Sisters and began touring North America and Europe in the late 1950s. While the group was performing in Toronto in 1961, Salome met First Floor Club owner Howard Matthews; they married three years later and she settled in Canada. When the trio broke up, Bey 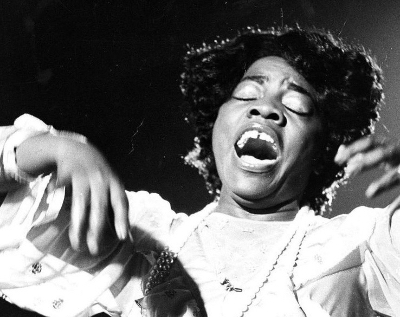 focused on her own career, recording her debut album in 1970 and starring in the first of her award-winning musicals, Justine, the same year. After appearing on record with renowned jazz pianist Horace Silver and earning a Grammy nomination for her contribution to a Broadway cast album, Bey wrote and starred in Indigo, an award-winning cabaret about the history of black music broadcast on the CBC in 1984. Known for her graceful interpretations of timeless jazz, blues, gospel classics, as well as for her original compositions, Bey continued illuminating black music history, creating Shimmytime about jazz-blues singer Ethel Waters and Madame Gertrude about blues singer Ma Rainey. A mentor for young black Canadian singers, she sang for Canada Day celebrations at Ontario Place, Parliament Hill in Ottawa, and Expo 86. When she died in 2020, her singer friend Jackie Richardson described her as a Mother Earth. Said Richardson: “Salome was a bottomless pit of soul, the best in human values and being willing always to be that rock for those that needed that rock.”