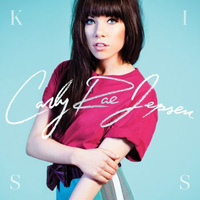 “Call Me Maybe” is a phenomenon. The song has sold over nine million singles worldwide and videos of the infectious hit, sung by Justin Bieber, Katy Perry, Sesame Street’s Cookie Monster and even former U.S. Secretary of State Colin Powell, went viral. Bieber was so enamored of the song that he signed the young woman behind it to his label. Now Jepsen, a 26-year-old native of Mission, B.C. and a former Canadian Idol contestant, is poised to capitalize on its success.

Featuring the ubiquitous song itself and 11 other numbers, Jepsen’s Kiss is full of supercharged dance pop. The album’s first single, “This Kiss,” produced by LMFAO’s Redfoo, has the same clubby appeal as her mega-hit. And “Good Time,” a collaboration with Owl City,” shares some of its irresistible charms. But the freshest track is the ballad “Beautiful,” an acoustic duet with the Biebs. Jepsen’s album would have benefitted from more of that diversity, maybe.