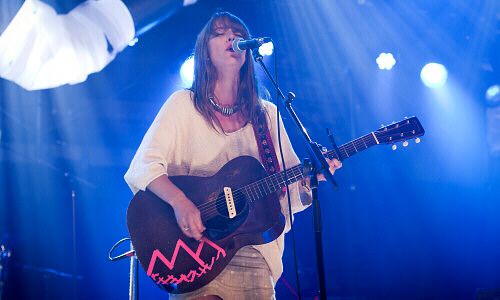 I had the honor of introducing Feist at the Polaris Music Prize gala on Sept. 24 at Toronto's historic Masonic Temple. She won the prize, after performing "Caught a Long Wind" and "The Bad in Each Other." I was pleased, as Metals is an extraordinary album and had been my number one pick all along.

Here's what I said in my introduction:

After the runaway success of The Reminder, Feist needed a clean slate. She found it in Big Sur, a place of stunning vistas and quiet reflection. Working there with longtime partners Mocky and Chilly Gonzales, she discovered a new range of expression and forged an album of rare depth and beauty.

Feist found inspiration in the elements and cast them into alloys hard and soft. The brave new songs that emerged rank easily as her most powerful to date.

Metals is Feist at her feistiest. There’s the chaotic urgency of “A Commotion” and the edgy stomp of “The Bad in Each Other.” But it’s also Leslie at her loveliest, from the piano-laced intimacy of “Caught a Long Wind” to the sea-swept introspection of “Cicadas and Gulls.”