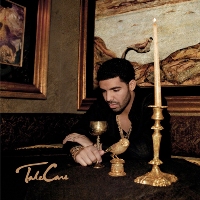 Among hip-hop superstars, Drake is an anomaly: an actor-turned-rapper who’s never been shy about showing his feelings. Sure, Drake has his chest-thumping moments like any rap artist worth his salt. And, like Kanye West, he’s got his conflicted side, expressing discomfort with some of the trappings of fame. But, at the end of the night, when the party’s over, Drake is the one rapper who can open up and croon convincingly about romance and lost loves.

Born Aubrey Graham to a mixed-race couple that divorced, Drake was raised by his Jewish mother in Toronto’s wealthy Forest Hill district. He first made his mark in acting, starring as Jimmy Brook, the disabled basketball player in TV’s Degrassi: The Next Generation. His music breakthrough came when his mixtapes brought him to the attention of rap star Lil Wayne. After landing several singles, including “Best I Ever Had,” on the U.S. charts, Drake released his debut album, Thank Me Later. Featuring a duet with Alicia Keys and collaborations with Kanye and Jay-Z, it sold a million copies and earned him two Juno Awards. Now Drake has released Take Care, his ambitious sophomore CD that provides further insights into his fascinating world.

The album’s 16 tracks showcase real artistic growth, both lyrically and vocally, and reveal the dual sides of Drake’s colorful personality. There are club thumpers like “Make Me Proud,” a duet with Nicki Minaj, and “Headlines,” a jittery treatise on celebrity. There’s plenty of dreamy R&B, including “Crew Love” and “Doing it Wrong,” Drake’s collaboration with Stevie Wonder. Most songs are steeped in melancholy, whether it’s the drunk-dial confessional “Marvin’s Room” or the ghostly “Over My Dead Body,” a piano-ballad lament with Chantal Kreviazuk. The highlight is the romantic title track, a duet with Rihanna. “I know you’ve been hurt by someone else,” Rihanna sings to Drake sweetly, before offering him solace. It’s the album’s most tender moment—one that promises to seal Drake’s reputation as hip hop’s most sensitive rapper.