Eurythmics - A musical marriage at the top of pop A metamorphosis is under way. A face, seemingly made of candle wax, takes shape beneath a flickering flame. It is Annie Lennox, provocative singer of Eurythmics, the British pop duo. Then, the video for Eurythmics’ latest single, “Missionary Man,” turns more sinister, with a scene in which a dark figure — Dave Stewart, the duo’s other half—is seen cooking potions in a laboratory. The video cuts back to Lennox’s face, now helplessly harnessed to a set of mechanical devices— communicating a strong message of struggle against others’ attempts at control.

For Lennox and Stewart, veterans of contractual disputes with record and management companies, that message has special resonance. The pair has also survived bankruptcy, broken romance and Lennox’s vocal ailments to rebound this summer with a new album, backup band and an imminent world tour. Opening on July 28 at Vancouver’s Expo 86, it will include stops in Toronto and Montreal. Most importantly, Eurythmics has survived with its reputation intact as one of pop’s most creative, compelling forces. Few acts are as inventive, or successful. Rolling Stone magazine writer Kurt Loder told Maclean’s, “They combine avant-garde ideas with soulful music—they’re amazing.”

In its five years of existence, Eurythmics has sold more than eight million albums worldwide and performed on three sold-out international tours. With such albums as Sweet Dreams and Touch, the group has established a distinctive sound, blending Lennox’s sensuous, high-powered vocals and Stewart’s cool, hypnotic electronic arrangements. Stewart’s flair in the studio has also won him contracts to produce discs for Bob Dylan, Daryl Hall of the white soul duo Hall & Oates, and Bob Geldof on his first solo album. As for Lennox, Loder—Tina Turner’s biographer —describes the British singer as “one of the great vocalists of her generation.” 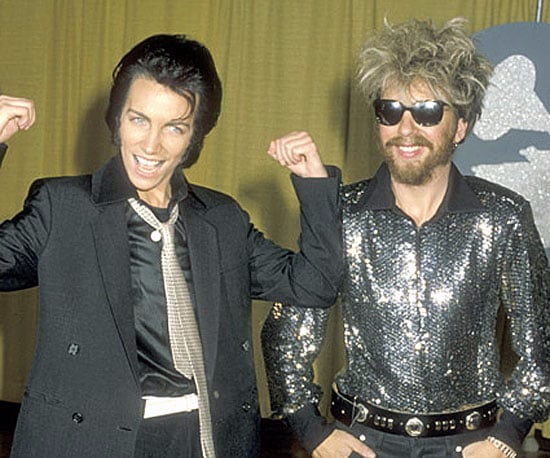 Lennox’s voice is only one element of the group’s appeal. With offbeat album covers, haunting videos and startling attire in live performances, Eurythmics has also produced many of recent pop’s most lingering images. In the early 1980s Lennox captured spotlights for juxtaposing her chiselled beauty with close-cropped orange hair and a wardrobe of men’s suits. The cover of the group’s 1983 album, Sweet Dreams, depicted an apparently naked Lennox wearing a mask and holding a red, heart-shaped box. Wrote the group’s biographer, Johnny Waller, in his book, Sweet Dreams: “In one image, Eurythmics combined sex, romance and mystery.” And when Eurythmics performed on the 1984 Grammy Awards show before a worldwide television audience of 65 million, Lennox appeared as Elvis Presley, complete with a pompadour wig and long sideburns.

Lennox says her flirtation with androgyny is now over. In an interview in Los Angeles, she told Maclean’s: “I was concerned that I would be seen as a typical sexy girl singer, so I decided to break that stereotype. Now that I’ve established that, I feel more comfortable about allowing my own sexuality to come through.” Experimentation continued. For videos accompanying the 1985 album, Be Yourself Tonight, Lennox wore slinky dresses, and Eurythmics set aside synthesizers for lively guitar-based music featuring strong elements of saxophone-backed soul—including an inspired duet with Aretha Franklin. But the group’s distinctive elements remained: Stewart’s imaginative production and the magnetism of Lennox’s vocals. 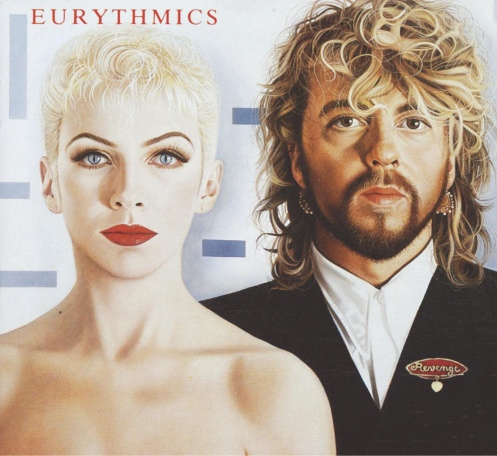 In interviews, the famous voice disappears and Lennox, 31, communicates in a low whisper. Plagued by nodes on her vocal chords from the stress of performing, she has been under doctors’ orders to spare herself undue strain. Still, she spoke enthusiastically about the group’s latest album, Revenge. “There’s a stylistic continuity to it,” she said. “We tried to make each song make sense in terms of what comes before and after it.” Produced by Stewart, Revenge features a new horn-powered sound, Stewart’s frenzied guitar solos and steamy duets between Lennox and backup singer Joniece Jamison.

Lennox is indisputably one of the strongest voices in white soul. She discovered the Motown sounds of Stevie Wonder and The Supremes while growing up in the Scottish city of Aberdeen. The only child of a shipyard worker and his wife, she studied piano and later went to London to the renowned Royal Academy of Music. After she dropped out in 1975, she met Stewart, an out-of-work musician. He and fellow musician Peet Coombes swiftly enlisted her in a budding folk-rock group, The Tourists. Lennox describes her first impression of the ebullient Stewart, a native of Sunderland in northern England, as “looking like he’d been dragged through a hedge backwards.” Still, they fell in love.

During the next two years The Tourists released three successful albums and a hit song, a campy version of Dusty Springfield’s “I Only Want to Be with You.” Meanwhile, they amassed debts of $80,000. Lennox and Stewart lay the blame on a contentious record contract and difficult relations with a management company, a matter which is still before the British courts. Bankrupt and bitter, The Tourists disbanded in 1980. The experience left Lennox and Stewart determined not to let it happen again. 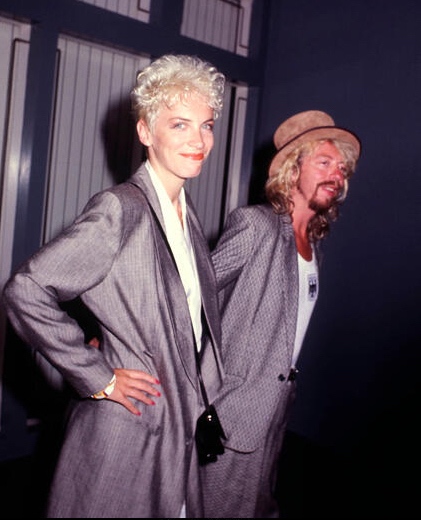 But the stress had destroyed their four-year-old romance. Said Stewart: “Our relationship was too consuming. The only way to survive was to live apart.” Still, they decided to preserve the marriage of their musical talents. They wrote a manifesto outlining their goals and the rules by which they would conduct business. Then, they formed their own company, DnA (for Dave and Annie) Ltd., hired a new manager and named themselves Eurythmics—a word they coined because it sounded European and rhythmic. In 1981 they went to Cologne, Germany, to record the group’s first album, In the Garden, with the help of producer Conny Plank, and persuaded a skeptical RCA Records to release it.

It foundered. Finally, Lennox and Stewart retreated to a London warehouse and recorded their next album, Sweet Dreams, in a home-made recording studio. The title track, with its cynical lyrics (“Some of them want to use you/Some of them want to abuse you”), became a 1983 international hit.

With success came the struggle to maintain creative independence. The pair blocked attempts by a U.S. company to use Sweet Dreams without permission to advertise a soap product. Next, in 1984 RCA produced a Eurythmics concert video against the wishes of both musicians. As well, the record company re-mixed tracks from Touch, and then released it as a new version of the album. Although they still record with RCA, Stewart complained, “It’s just extended versions of things that don’t need to be extended.”

Despite that, Eurythmics kept winning spots at the top of the charts. And Lennox took a small role in Hugh Hudson’s 1985 epic film, Revolution, as a Yankee patriot inciting mobs to attack the British. Then, her throat problems flared up, and she retired for a year—part of which she spent on the Indonesian island of Bali in order to rest and avoid talking. Waiting for her to recover, Stewart, a self-confessed workaholic, took on a daunting round of production work for such rock stars as The Ramones and Tom Petty, Irish singer Feargal Sharkey and Dylan. Finally, this spring he and Lennox were free of other commitments and rejoined forces at Plank’s Cologne studio to record the Revenge album. Said Stewart: “It was like going back in time. We even found ourselves sitting around the same kitchen table.” Added Lennox: “We’ve been through a lot, Dave and I, and been taken advantage of. But our music is all the revenge we need.”

To prepare for their upcoming tour, Lennox and Stewart have been holding public rehearsals with their new backup band in Los Angeles clubs. The prospect of hearing them has created excitement even in jaded Hollywood. One night last month, 400 fans packed the steamy Roxy club on Sunset Boulevard—including actors Jack Nicholson and Jodie Foster. When Eurythmics launched into a defiant rendition of Missionary Man, with Lennox growling the words “Be true to yourself and you can’t go wrong,” it carried a personal undertone. Nearly five years after they penned their manifesto for survival in the music business, two of pop’s most stellar performers are calling the tune.