Flying high with John Kay and the Sparrows John Kay was a German-born singer who was playing folk-blues guitar and harmonica at Yorkville’s Half Beat and crashing above the Night Owl in an apartment belonging to Vicky Taylor, Joni Mitchellʼs ex-room-mate. One night in 1965, during an after-hours jam session above the Half Beat, some of the Sparrows came up, heard Kay and joined in. They loved Kayʼs bluesy edge and later suggested he drop by the Devilʼs Den and play some harmonica. The Sparrows then asked Kay to join—but not without a makeover. 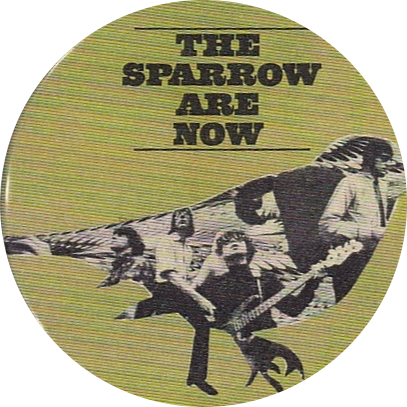 According to Jerry Edmonton, Kayʼs hair, for one thing, didnʼt look right. “It was all slicked back. He looked more like James Dean, black hair, greasy and combed back. He was a bit pudgy and was wearing white Leviʼs which I thought was odd. After [he] joined, I took him down to Cy Mann [rival to Lou Myles] for some decent clothes and we washed his hair.”

If The Sparrows gave Kay some fashion tips, Kay, in turn, hipped the band to grass and acid. The real drug connoisseurs, however, were two waitresses—Jutta Maue and Solveigh Schattman. Originally from Germany, Maue and Schattman emigrated to Canada as au pair girls, and both worked at the 71 Club after meeting owner Werner Graeber. In short order, the two moved on to other Yorkville coffee houses, including the Penny Farthing, the Half Beat and the Riverboat, and became the most popular waitresses in the village. Using their tips to buy everything from amyl nitrates to acid and heroin, the pair began hanging out with what Maue admits was a dangerous crowd: “gamblers, older guys from Cabbagetown.” Then Kay met Maue and they started double dating with Schattman and The Sparrowsʼ Nick St. Nicholas (himself a German, born Klaus Karl Kassbaum). For Kay and Maue, still married all these years later, it was the start of a life-long relationship.

Kay talks about that year in Yorkville as the best time of his life. “It was one of those rare situations where your private and professional lives totally merged. During the week, Yorkville was this isolated oasis of lifestyle and attitude. The Sparrowsʼ gear was set up at the El Patio or Chez Monique, where weʼd rehearse during the day and play at night. And the village was our home. We ate at the Mont Blanc restaurant and when we got the munchies, weʼd go to the Grab Bag, which was sort of a hip 7-11. People lived above stores—it was a real community. And musically, you could check out what everyone else was doing because it was all right there.”

It wasn't long before the Sparrow (they dropped the "s" and made it singular) flew south and found fame as Steppenwolf.

Tweet
Tags:
yorkville steppenwolf the sparrow the sparrows john kay
Eurythmics - A musical marriage at the top of pop
Peter Goddard - a critic for all seasons