Fran's Restaurants - Would you like some music with your banquet burger? For over 80 years, Fran’s restaurants have enjoyed a warm and cozy relationship with Toronto. Like the comfort food in which they specialize, the chain of family-style eateries won fans with their affordable, unpretentious offerings, from bottomless cups of coffee and belly-busting all-day breakfasts to the world’s first banquet burger, a burger served with bacon and cheese.

Fran’s restaurants were the brainchild of Francis “Fran” Deck, who shuffled here from Buffalo in 1940. He opened his first restaurant the following year—a diner at 21 St. Clair Avenue West that originally had just 10 seats. His second location, at 20 College Street, opened in 1950, and quickly became popular with Eaton’s shoppers and Maple Leaf fans alike, who’d stop in before and after games at the Gardens. 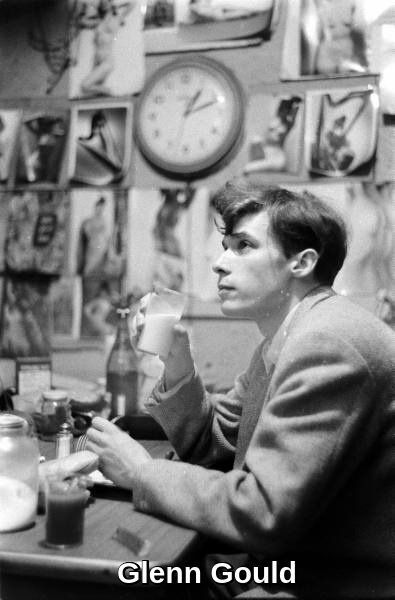 Open 24 hours a day, Fran’s became especially popular with the city’s late-night denizens. Perhaps its most famous customer was world-renowned classical pianist Glenn Gould, who habitually made the trek to the St. Clair diner from his penthouse apartment a block away. “Gould would go to Fran’s,” wrote the Toronto Star’s Hugh Thomson, “sometime between two and three every morning, sit in the same booth and order the same meal of scrambled eggs.”

The notoriously eccentric Gould’s fondness for Fran’s is well-known among Toronto trivia nuts, but few realize that back in the day the restaurant chain also served live music as regularly as chili, rice pudding or apple pie. More often than not, the music featured was more adventurous than the food on the menu. 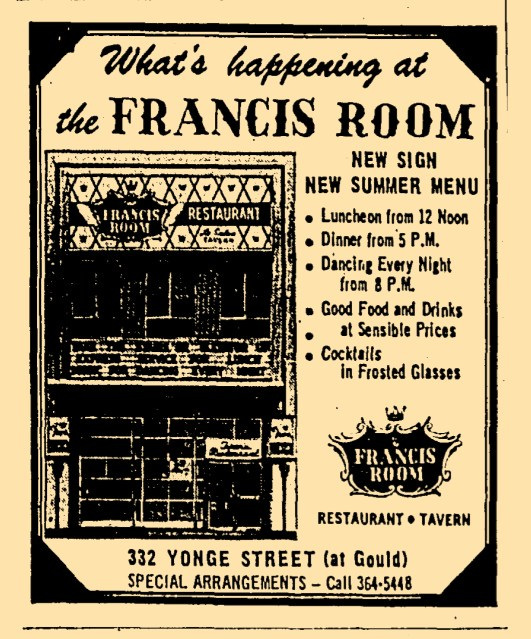 When Fran Deck opened his fifth restaurant at 332 Yonge Street, he devoted the top floor of the building to a fine dining room with live entertainment and dancing. Immodestly, he called this second restaurant the Francis Room and began booking artists with an ability to raise eyebrows and move feet. In 1964 alone, the Francis Room featured such diverse performers as Cuban-born Chicho Valle y los Cubanos, an early popularizer of Latin American music in Canada, Phyllis Marshall, an African-Canadian vocalist who’d sung with Cab Calloway’s orchestra, and singer Ohulani Otbo, known as the queen of Hawaiian music in Toronto. A young Gordon Lightfoot, then appearing as “Gord Lightfoot,” even performed there briefly, before getting lured across the street to play for better money at Steele’s Tavern.

For the next few years, the Francis Room, always advertised as “The Place to Go Atop Fran’s,” continued to offer a wide range of live music. This included everything from vocal duos and trios (Pat & Jackie, The Hi-Lites) and dance bands (Doug Bennett’s Trio, the Wally Wicken Orchestra) to a diminuative rock-and-roller from Alabama named Little Linda Lou, who stood just 3 feet 11 inches. 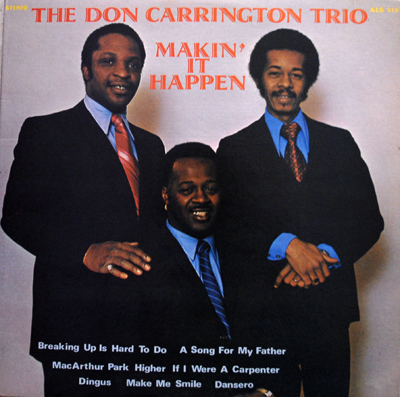 Then, starting in 1968, the Don Carrington Trio began a year-long residency at the room atop Fran’s, deep in the heart of the Yonge Street Strip. What this group played were some of the funkiest sounds north of Memphis. With Carrington on tenor sax, a drummer and Hammond organist, the trio would cover Chicago’s “Make Me Smile” and Sly & the Family Stone’s “I Want to Take You Higher.” But they could also turn a jazz standard like Horace Silver’s “A Song for My Father” or popular, gentle-on-the-mind hits of the day like Tim Hardin’s “If I Were a Carpenter” into fiery, infectious blasts of sweet psychedelic syncopation.

Pleased with the reception Carrington was getting, the Francis Room re-booked his trio into the following year, which coincided with the release of Makin’ It Happen, the group’s album on the Paragon label. Featuring organist Ricky Day and drummer Cookie Edwards on the vocal tracks, Makin’ It Happen is today one of the rarest and most sought-after funk recordings, with crate-diggers and rappers seeking the mix of sizzling sax solos and frenetic breakbeats. Those lucky enough to find a copy today can expect to pay upwards of $500 for the album.

The Francis Room later booked pianist Cy McLean, an African-Canadian bandleader who broke the colour barrier on Yonge Street back in 1947, when his Rhythm Rompers were booked into the Colonial Tavern. Interestingly, Don Carrington first got his start playing saxophone in McLean’s big band. 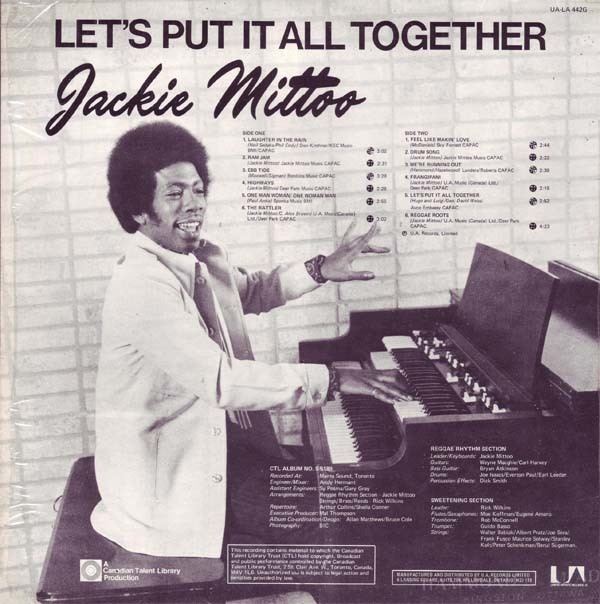 The success of the Francis Room led Fran Deck in the 1970s to start booking live music into the Crown Room, part of his expanded flagship restaurant on St. Clair, the favourite haunt of night owl Glenn Gould. The Crown Room’s most notable booking was influential Jamaican-born keyboardist Jackie Mittoo, who some consider to be the inventor of reggae music. It wasn’t Mittoo’s first experience with Fran’s. In 1969, the year he arrived in Toronto, he sat in as a guest organist with Don Carrington at the Francis Room (a Globe and Mail article observed that “Jackie Mittoo from Jamaica contributes calypsos”).

Uptown on St. Clair, Mittoo played nightly for Fran’s customers, often with his quartet that included guitarist Wayne McGhie, percussionist Lord Tanamo, bassist Brian Atkinson and drummer Joe Isaacs. These were the same players that accompanied Mittoo on Let’s Put It All Together, his second album for the Canadian Talent Library (CTL), and performed with him at other lounges around town. 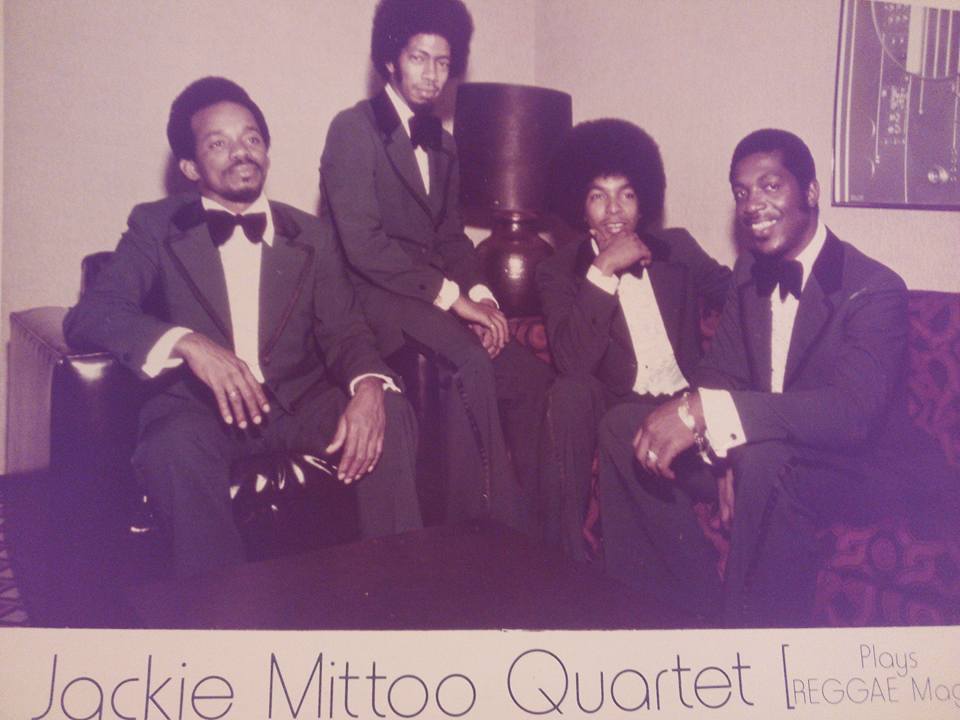 Fran’s Crown Room was directly across the street from radio station CFRB, which had initiated the CTL label as an outlet for easy-listening recordings. Mittoo’s work with CTL got his music played on CFRB and other middle-of-the-road stations, which proved a crucial crossover and door-opening opportunity for reggae music in Canada. At the Crown Room, Mittoo’s quartet played a variety of styles and covers to appeal to people unaccustomed to Caribbean music. “We’d do reggae, jazz and slow songs,” notes Mittoo drummer Isaacs. “We’d have to mix it up with songs that were familiar to the audiences.”

Fran Deck had no idea that his booking of the versatile keyboardist would help pave the way for reggae’s acceptance in Toronto. And it’s unclear whether Glenn Gould ever caught the keyboard work of his Caribbean counterpart. Had the two met late one night at Fran’s, who knows what musical magic might have transpired?