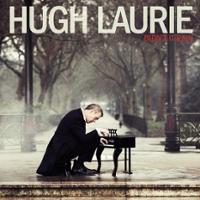 Casual fans of House may be aware that the Hugh is also a musician, having seen his character Dr. Gregory House play piano in a few episodes of the popular TV show. Hardcore devotees will know that the English actor released a fine debut recording, 2011’s Let Them Talk, his tribute to the music of New Orleans. Now he’s moving further afield. “I have resolved to forge on deeper into the forest of American music that has enchanted me since I was a small boy,” says Laurie, in his erudite way. Didn’t It Rain features blues, jazz and even a sultry, tango-flavored number. Fans will love Laurie’s boogie-style piano playing on W.C. Handy’s “St. Louis Blues,” and his swinging vocalizing on Dr. John’s “Wild Honey.” He’s joined on the album by a formidable cast, including singers Taj Mahal, Gaby Moreno and Jean McClain and Canadian sidemen Kevin Breit and David Piltch. “The further I go,” says Laurie of his latest musical excursions, “the more bewitched I become, both by the songs and the people I’ve been lucky enough to play them with.” We’re bewitched too.