The Troubadour is one of the most storied venues in popular music. Beginning in 1961, owner Doug Weston ran the club, located in West Hollywood on Santa Monica Boulevard, as a showcase for folk and country artists. Later, it featured rock musicians as well.

The Troubadour is where Elton John made his triumphant U.S. debut, where the Byrds, who met at a Monday open mic, first performed their classic take on Dylan’s “Tambourine Man,” where Buffalo Springfield made their live debut, where the Eagles’ Don Henley and Glenn Frey met in the front bar and where Led Zeppelin famously played with Fairport Convention in a three-hour jam session.

But more than anything, the Troubadour became synonymous with singer-songwriters. It’s where Kris Kristofferson first sang “Sunday Morning Coming Down” in public with Johnny Cash, where James Taylor made his solo debut, where Tom Waits was discovered during an amateur night and where Tim Buckley recorded his 1969 album Live at the Troubadour.

Canadian singer-songwriters, in particular, are closely associated with Weston’s legendary club. Joni Mitchell made her Los Angeles debut at the Troubadour in 1968, while Neil Young played his first U.S. solo show there the following year. 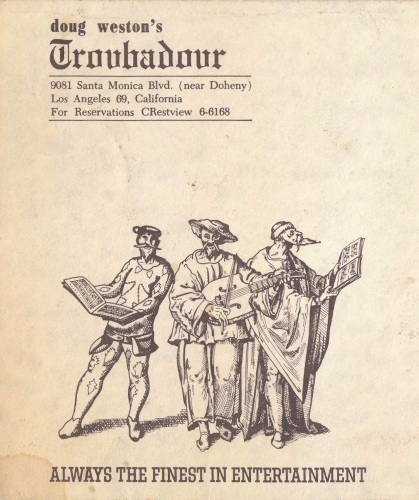 When Lightfoot first appeared at the Troubadour on April 2, 1968, accompanied by guitarist Red Shea and bassist John Stockfish, Chuck Mitchell was there to see it. The American folksinger and ex-husband of Joni Mitchell knew Lightfoot from their days together in Detroit. Backstage, Mitchell witnessed his friend’s nerves up close.

“Like all of us, Gordon had genuine self-doubt and wasn’t totally secure,” says Mitchell. “And the Troubadour could be an imposing room. But when Gordon walked out on that stage, he saw that the place was packed. He sang his set and the people knew his songs. In the end, he got several encores, and when he came offstage, he virtually broke down. It was very emotional.”

But nothing compared to Lightfoot’s second appearance at the Troubadour in September, 1968. His first time there was his introduction to American audiences; his return felt like a coronation. The club was packed with actors, agents, record executives and beautiful women. Also in the audience that week were two influential L.A. figures: DJ Skip Weshner, who had Lightfoot on his radio show for a second time, and Robert Hilburn, music critic from the Los Angeles Times. Lightfoot impressed Hilburn enough for him to write a lengthy “star is born” profile headlined “Lightfoot Arrives.” Lightfoot never looked back.