LiveonRelease - Goes on a Fieldtrip 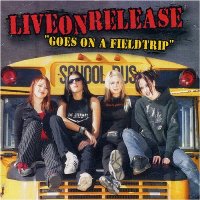 Baby Bifs, the four teenage girls in LiveonRelease are indebted to their den mother, Vancouver punk queen Bif Naked. At 10, Brittin Karroll co-wrote a track on Naked’s I Bificus album touring with her (Karroll’s dad manages the punk veteran). Then, after Brittin formed LiveonRelease, it seemed natural for Naked to put out the group’s debut album—including the hit single “I’m Afraid of Britney Spears—on her own label. The group’s followup features tough rockers like “Jaded” and “Paranoid.” But it’s worth asking: are they now afraid of Avril Lavigne?