Malka & Joso - Songs in Many Tongues Long before the term “world music” became a popular catch-all for sounds from around the globe, Malka & Joso were singing songs in Spanish, Italian, Hebrew, Creole French, Macedonian and Russian. During the mid-1960s, the handsome folk duo brought a distinctly international flavour to the Canadian folk scene, performing in coffeehouses and concert halls, at folk festivals and on television with their own weekly CBC program. Malka & Joso’s three albums for Capitol Records were the unlikely hits of the decade, outselling many of the label’s English-language albums. 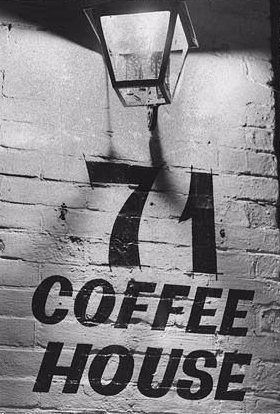 Malka Marom was born in Israel, the daughter of a cantor. Joso Spralja was born in the former Yugoslavia, the son of a fisherman. The two met in Toronto’s Yorkville district one night in early 19963, at an after-hours coffeehouse called the 71. It proved a fateful meeting. Recalled Spralja: “Often at 71, I’d stay on to sing until three in the morning for other artists who dropped by. Malka used to come sometimes. One night she offered to teach me a few of the folk songs she knew, and we began to harmonize.” Soon after, they began getting steady work together.

That summer, Malka & Joso played the Mariposa Folk Festival in Orillia, Ontario, on a bill with Ian & Sylvia, the Travellers and a duo called the Two Tones that included a young Gordon Lightfoot. By the following year, record retailer Sam Sniderman was an enthusiastic fan and recommended them to Capitol’s A&R man Paul White. Recalls White: “Sam phoned and told me that I just had to sign this duo. He was always doing that. He said, ‘Could you at least meet them?’ I didn’t meet with Joso at first, because Malka came in to my office and completely charmed me. She was gorgeous. I think [Capitol president] Geoff Racine melted as well. I went to see what they were like, and she and Joso were absolutely great together. I signed them right away.”

In December 1964, Malka & Joso went into Toronto’s RCA Studios with guitarists Eli Kastner and Rafael Nuñez and bassist Fred Muscat to begin recording for Capitol. Although the recording session went overtime, it produced enough material for two albums. “This wasn’t an expensive undertaking,” says White. “If the whole session cost me $1,000, then I was really going crazy.” 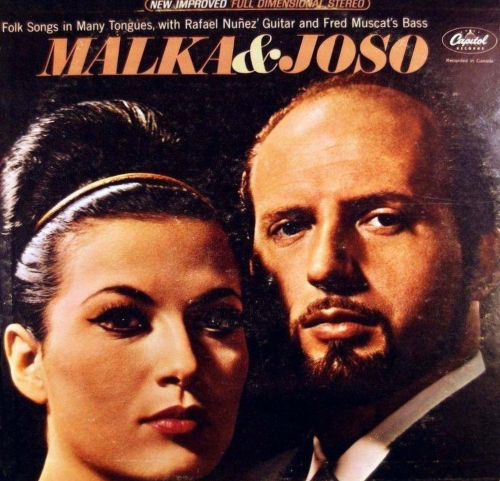 The first album, Introducing Malka & Joso, hit stores in January. Featuring the playful Caribbean standard “Abakaila,” Brazilian Dori Caymi’s stirring “Curimã” and the rousing Spanish flamenco of “Doce Cascabeles,” it sold well, enjoyed an international release in both England and the United States and garnered rave reviews. Wrote music critic Clyde Gilmour in the Toronto Telegram: “In refreshing contrast to many another contemporary balladeer, Malka & Joso do not specialize in suicidal dirges about lynchings, chain gangs, mortgage foreclosures and industrial unrest. They sing about such timeless matters as young love, the serenity of shepherds and the way of a man with a maid.”

Malka & Joso’s second album, Mostly Love Songs, came out in late ’65—just as the duo won the RPM Award as the year’s Best Folk Group. Then, at Sam Sniderman’s suggestion, they proposed an album of songs from Israel to Capitol’s Paul White. The label eventually released Jewish Songs, which proved to be another bestseller. “I was dubious at first,” admits White, “but that album wound up selling 10,000 copies, all through Sam I think.” 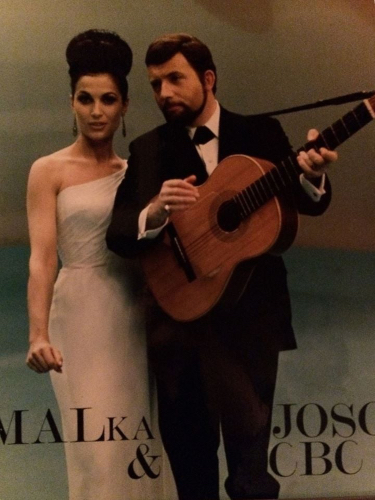 In the fall of ’66, Malka & Joso’s A World of Music TV show became a replacement for the long-running Juliette in the Saturday slot following Hockey Night in Canada. The weekly CBC series took the duo’s cosmopolitan repertoire into the living rooms of the nation. The first program, filmed on location in a Toronto park, featured Brazilian guest Astrud Gilberto walking over a bridge singing “One Note Samba” and Malka, reflected upside down in a pool, reciting “I Will Wait for You.” Before they split in 1967, Malka & Joso performed in the United States and were favourites of The Tonight Show’s Johnny Carson, who had them on his program an impressive four times.

Canada now boasts a thriving world music scene, with artists who perform everything from Spanish flamenco to Yiddish folk. Malka & Joso were the first on the scene—back in the days when any song not sung in English was considered “exotic.”

This article originally appeared in Fifty Years of Music: The Story of EMI Music Canada by Nicholas Jennings, published in 2000 by Macmillan Canada.