Global music often works best on the dance floor where, free from ghetto-izing labels and strict radio formats, it can cross over and capture the imagination of anyone with open ears.

No one knows this better than Manu Dibango, one of the giants of modern African music, whose hit 'Soul Makossa' became a dance-floor favorite more than two decades ago. 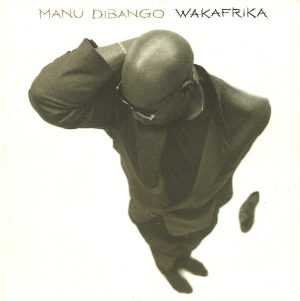 Despite his classical training and his jazz sensibility, the Cameroonian master has spent much of his career tailoring his Afro- funk sound for dance clubs. He's collaborated with riddim twins Sly & Robbie, studio wiz Bill Laswell and Working Week's Simon Booth, who produced Dibango's brilliant 1991 album Polysonik, an African-flavored forerunner to hip-hop jazz.

The Makossa Man's latest, Wakafrika (Giant/Warner), is a highly danceable collection that could well be subtitled Africa's Greatest Hits, featuring as it does such classic songs as 'Wimoweh', 'Pata Pata', 'Lady' and 'Soul Makossa'. And Dibango is backed by a group of musicians that reads like the African All-Stars, including Youssou N'Dour, King Sunny Ade, Salif Keita and Angelique Kidjo.

"Jazz has its well-known songs, its standards," explained Dibango, speaking from his home in Paris, "so I thought, why not put together an album of African standards. It's a way of preserving these wonderful songs."

However, Wakafrika, produced by George Acogny, is anything but a stuffy museum p 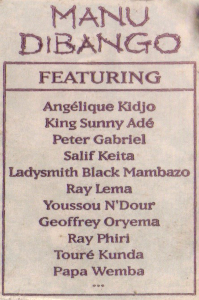 iece. Soulful and funky, it breathes new life into songs as old as 'Wimoweh', with Ladysmith Black Mambazo providing exquisite mbube sounds, and offers a definitive African version of Peter Gabriel's 'Biko' (Gabriel and Sinead O'Connor sing on the track). Meanwhile, N'Dour contributes a stunning vocal to an acid jazz-styled 'Soul Makossa' and Keita soars over a vibrant rendition of the Toure Kunda hit 'Emma'.

"It was dream casting," admits Dibango, of the album's line-up. "I was like a tailor choosing the threads with which to make this elaborate costume. It was very exciting."

He added: "We Africans don't actually know each other that well. We meet in Paris, New York or London, but really we don't have the opportunity to have a common link. So this idea came to have a kind of musical safari."

As for the dance floor, expect it to be moving this summer to Dibango's 'Soul Makossa'. A new 12-inch remix by US3 seems certain to make it a hit all over again.