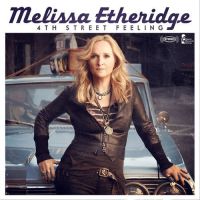 Renowned for her honest songs about romance, Etheridge has never shied away from tough choices. The Kansas-born rocker came out as a lesbian in 1993, the same year she won a pair of Grammy Awards. Married twice, to film director Julie Cypher and actress Tammy Lynn Michaels, she became a devoted parent to four children. Now 51, Etheridge has learned from her experiences, including overcoming breast cancer. The latter, she says, “taught me to cherish my health and life, and to take joy in every day.”

That wisdom runs through 4th Street Feeling, Etheridge’s new album, most prominently on the twanging “Falling Up.” “So here’s to me, let’s raise a cup,” she sings. “I’m fancy free and I’ve fallen up.” Several tracks, including the sultry “Rock and Roll Me,” showcase her no-nonsense brand of expression, while the coming-of-age title track celebrates youthful freedom. Bracingly real, Etheridge’s latest reflects all of her hard-won strength and confidence.