Canadian musicians have always flocked to New York, drawn like moths to the bright lights of the city that never sleeps. Dreams of a breakthrough in New York have inspired artists ever since Toronto vocal groups the Crew-Cuts, the Four Lads and the Diamonds all had success there, followed by Ottawa teenager Paul Anka, who ventured to the Big Apple in 1957 and scored a number one hit with "Diana," his lovestruck ode to a former babysitter.

In March 1967, the Paupers flew to New York to play the Café Au Go-Go. The Toronto psychedelic rock group had been booked to open for America's hottest band, the Jefferson Airplane. On the night of the gig, the Au Go-Go was packed with the elite from both the media and music worlds, a whoʼs who of the hip, including the Beatlesʼ manager Brian Epstein and Albert Grossman, who was already managing Dylan, Peter Paul & Mary, Ian & Sylvia and Lightfoot. Some of the leading critics and photographers of the day were also crammed in, including the Village Voiceʼs Richard Goldstein and Linda Eastman (the future Linda McCartney). All of them had come to see the super-hyped Airplane.

But it was the Paupers that stole the show with a stunning display of musicianship and stagecraft and thrilling performances of songs like "Think I Care" and "Magic People." After they left the stage and reached their dressing room, the Paupers were greeted by an excited Epstein and Grossman. The Voice and Esquire demanded immediate interviews. And Eastman, then one of New Yorkʼs leading freelance photographers, was acting like a groupie and wanted to shoot the group the very next day. In the Voice, Goldstein raved about this group that had “swooped out of nowhere, from a scene nobody knew about.” The Paupers, he added “descended on New York like electronic thunder...their music makes the average combo sound like a string quartet doing Wagner...they have a power and discipline Iʼve never seen before in performance.”

Soon, other Canadian bands descended on New York. The Scene was a popular midtown nightclub at 46th Street and 8th Avenue. Owner Steve Paul had an uncanny eye for spotting new talent. Among the wide variety of performers he booked were the Velvet Underground, Pink Floyd, Jeff Beck, Traffic, the Rascals, Fleetwood Mac, the Chambers Brothers, the Doors and Jimi Hendrix, along with several of Toronto's top acts. 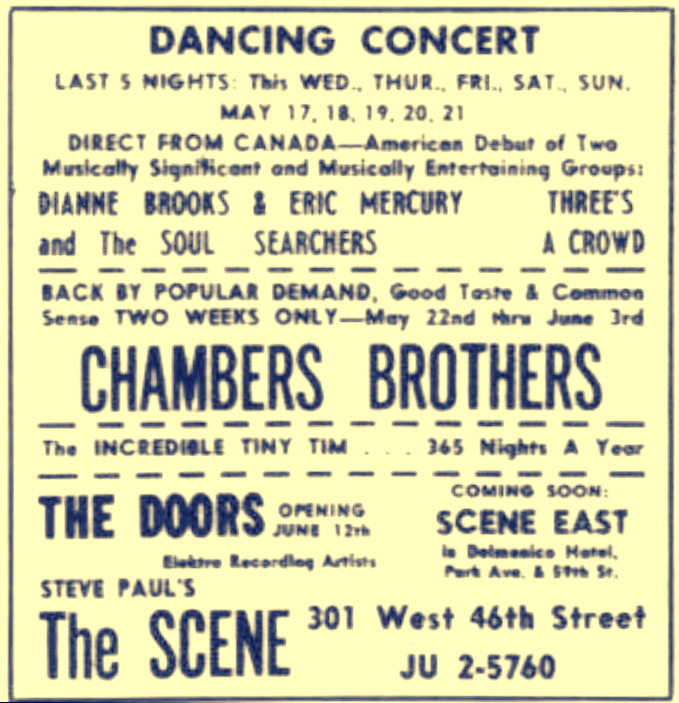 In May '67, the Scene featured Toronto folk-rockers Three's a Crowd together with r&b stars Dianne Brooks & Eric Mercury with the Soul Searchers. Billed as "Direct from Canada--American debut of two musically significant and musically entertaining groups," it proved to be one of the Scene's most adventurous bookings, mixing Mamas & 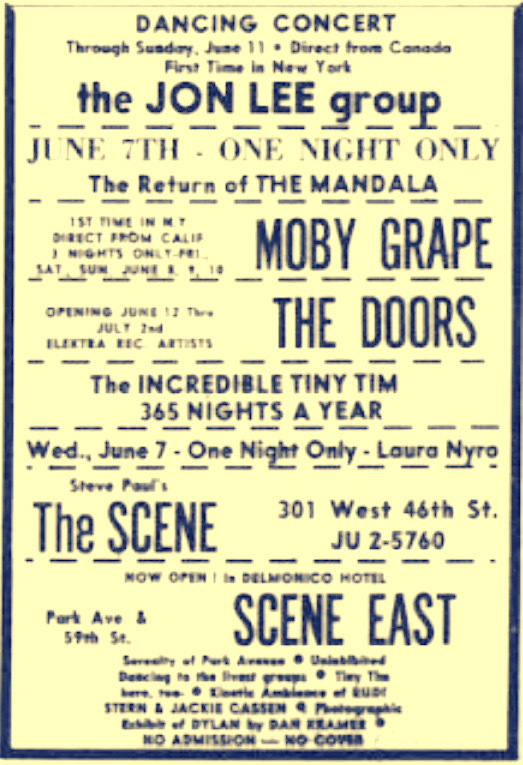 The Canadian invasion continued the next month, as the Scene brough in two of Toronto's finest blue-eyed soul bands: the Mandala and the Jon-Lee Group (formerly known as Jon and Lee & the Checkmates). It wasn't the Mandala's first time at the Scene and the group had also previously performed at New York's RKO Theatre on a star-studded bill with Cream, Wilson Pickettt, the Who and many others.

The Mandala, riding high on its hit song "Opportunity," capitalized on the New York exposure and brought its dynamic Soul Crusade show back to New York in July and again in September. From then until today, with the likes of Drake, the Weekend, Jessie Reyez, Shawn Mendes and Alessia Cara, Canadian artists have continued to fly south and find a welcome reception in the Big Apple.