Jackie Shane broke all the rules. An American-born, black, transgender woman, Ms. Shane first came to Canada in the conservative early 1960s and won over audiences with her glamorous image and soulful singing. For the next decade, she packed clubs in Ontario and Quebec and landed one memorable song, the slinky, sassy “Any Other Way,” near the top of the charts. But then Ms. Shane disappeared and erroneous rumours circulated of a possible murder or suicide. For the next 40 years, the mystery grew until word came that the retired performer was living back in her native Nashville.

Ms. Shane’s rediscovery resulted in a massive comeback that the former singer never planned – nor actively participated in – including a radio documentary and a reissued 1967 live album that earned Polaris Music Heritage Prize nominations for four consecutive years. Her story was featured in a TV documentary series, while her face appeared on a prominent, 22-storey Toronto wall mural of local music legends that included Ronnie Hawkins, Gordon Lightfoot and Glenn Gould. Meanwhile, Ms. Shane became an LGBTQ icon who last year inspired an anthology on the history of Toronto queer culture. But, through it all, she remained reclusive and never made a single public appearance, communicating only by mail and telephone.

When a compilation of her recorded work that she had authorized was nominated for a Grammy Award this year, Ms. Shane finally seemed ready to embrace her newfound fame. She granted a phone interview to CBC Radio and talked about her continued fondness for Canada, even hinting that she might perform again. But, on Feb. 21, came the news that she had died, at 78, of undisclosed causes at home, alone with her cat, leaving fans mourning the loss of a trailblazing talent.

“Jackie was a quietly flamboyant diva, really ahead of her time,” says Toronto soul singer Shawne Jackson-Troiano, who recalls being “awestruck” seeing Ms. Shane perform. “She was always just herself, being who she was born to be. I found her really inspiring.”

Ms. Shane arrived in Toronto in 1961 with the U.S. band Frank Motley & the Motley Crew. At the time, the city already had a burgeoning rhythm-and-blues scene. Bobby Dean Blackburn, whose group Bobby Dean & the Gems was the house band at Yonge Street’s Bluenote club, rushed over to the Holiday Tavern at Bathurst and Queen to catch dual trumpeter Mr. Motley and his hard-bopping band, which stayed on in Toronto and became known as the Hitch-Hikers, always with Ms. Shane as its star attraction. What really caught Mr. Blackburn’s attention was the band’s featured vocalist.

“Jackie Shane was simply the best singer I’d ever heard,” Mr. Blackburn recalls, “an excellent entertainer who dressed like a man but in a tastefully feminine way.” Added Mr. Blackburn: “Jackie would come to the Bluenote to sit in with us and even taught my wife, Jean, how to put on her makeup – that’s the truth.”

Saxophonist Steve Kennedy, then of Kay Taylor & the Regents (and later the Soul Searchers and Motherlode), was similarly blown away. “She could sing her ass off and was on par with artists like Little Richard and James Brown,” Mr. Kennedy recalls. “And people loved her – just loved her – because she was so real.” Duff Roman, the former CHUM disc jockey and broadcasting legend, saw Ms. Shane at the Saphire Tavern at Victoria and Richmond and credits her with bringing a new sophistication to Toronto’s music scene: “Jackie had a showbiz thing that you didn’t see at other clubs and projected real confidence.”

Mr. Roman added, citing part of the lyrics to Ms. Shane’s hit song: “When she sang ‘Tell her that I’m happy, tell her that I’m gay, tell her I wouldn’t have it any other way,’ you could enjoy the line in a number of ways. She sang it as a lyric, not a political statement. It was brilliant. What made it doubly brilliant was that she lived her lifestyle – she wasn’t closeted. When she decided at a young age that she was going to be an entertainer, it was going to be on her terms: Her terms were ‘Here I am, take me as I am. I’m not going to pander to anyone’s idea of what a performer should or shouldn’t be.’”

Much of what is known about Ms. Shane’s early life comes from telephone interviews conducted by Toronto musicologist Rob Bowman, who wrote extensive liner notes for the Grammy-nominated Jackie Shane compilation Any Other Way.

Jackie Shane was born in Nashville on May 15, 1940. At age 13, she told her mother that she was a girl trapped in a boy’s body. According to Mr. Bowman, the story gets increasingly colourful from there. Ms. Shane nearly became a professional gambler, sang in the “Soul Tent” of a carnival to escape Jim Crow racism, studied under Little Richard and, after arriving in Canada, was kidnapped by gangsters – twice. “Hollywood couldn’t make this stuff up,” Mr. Bowman says.

Like other African-American performers, Ms. Shane found acceptance in Canada. And Toronto’s nascent gay community embraced the cross-dressing performer, who favoured shimmering sequin pantsuits, full makeup, false eyelashes and a fabulous bouffant. In the live version of “Any Other Way,” Ms. Shane, in one of her spoken ad libs, expressed a coded sentiment to that community: “I hear them whisper. They say, there Jackie goes with a broken heart … but they’re wrong, darlin’. I’m having a good time, me and my chicken.” “Chicken,” writes Steven Maynard in his essay on Ms. Shane in Any Other Way: How Toronto Got Queer, “was gay slang for young men.” Mr. Maynard adds that gay gossip columnists in Toronto tattle sheets like Hush kept close tabs on Ms. Shane during her early days in the city. 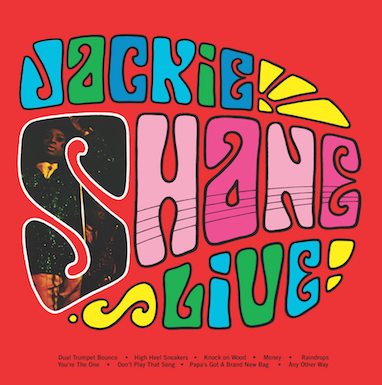 The winking double entendres of Ms. Shane’s onstage patter is evident all over Jackie Shane Live, the 1967 album recorded at the Saphire Tavern. The liner notes open with the warning “This album is not meant for squares.” It goes on to tease: “What are Jackie’s likes and dislikes? Well, you know Jackie likes ‘chicken.’ Even where food is concerned, Jackie likes chicken. The only problem is, when Jackie suggests ‘let’s go out and get some chicken after the show,’ you can’t be too sure what he has in mind.”

Toronto music archivist Jan Haust reissued the album on his Other People’s Music label in 2015. The Numero Group, a Chicago-based archival record label, then packaged the live session with studio recordings for the Grammy-nominated two-disc compilation Any Other Way, which came out last year.

Ms. Shane’s striking talent and playful sauciness appealed to everyone. Local singer Shirley Matthews, of “Big Town Boy” fame, performed a cover of Any Other Way at the Bluenote, prompting one Toronto newspaper columnist to quip: “Female impersonator Jackie Shane now has a female impersonating him.” “Any Other Way” has since been recorded by Canadian artists like Lori Yates and Danny Marks.

Brian Massey who, together with Tom Graham and the Regents band, backed up Ms. Shane during the summer of ’63, recalls how Ms. Shane was a notorious flirt. “Jackie was staying at the Westover Hotel (now Filmores) and there was a fire,” Mr. Massey says. “The Flash tabloid ran a story about the fire, how they evacuated the hotel and that Jackie had to stand out on the street in babydoll pajamas. I asked if he really wore babydolls and Jackie replied, ‘You’ll have to come up to my room and see for yourself, my little snapdragon.’” 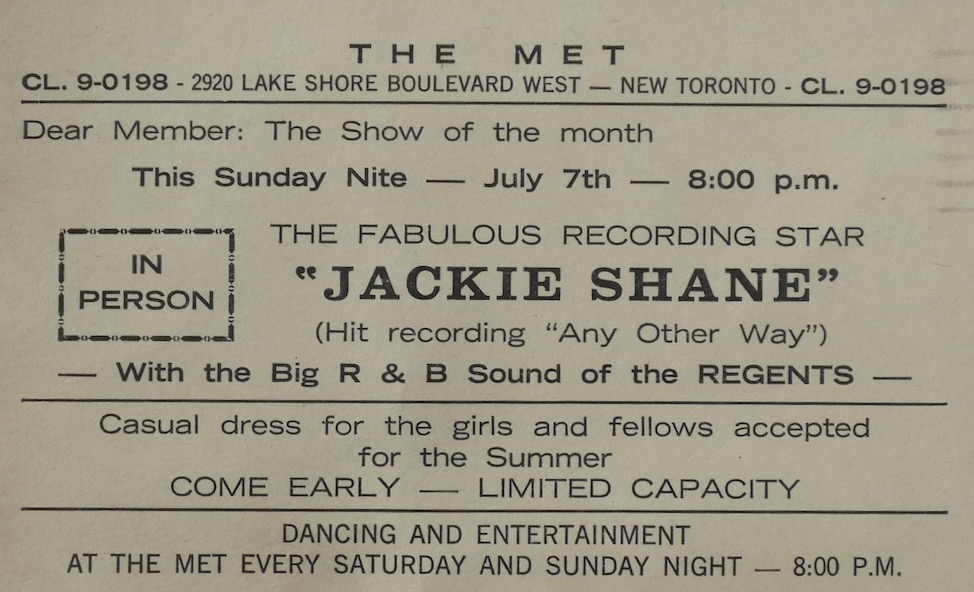 Many of Ms. Shane’s songs seemed autobiographical, whether they were originals or covers. “Sticks and stones may break my bones,” Ms. Shane sings on Titus Turner’s “Sticks and Stones,” "but now talk don’t bother me,” which echoes the slings and arrows she had to deflect from homophobic hecklers. Her 1967 cover of “Stand Up Straight and Tall” perfectly expresses her defiant self-pride and the two sides of her final single in 1969, “New Way of Lovin’” and “Cruel Cruel World,” both written by Ms. Shane, are clearly personal and heartfelt.

After performing one final Toronto date in 1971 with Mr. Motley at the Concord Tavern, near Ossington Avenue

and Bloor Street, Ms. Shane dropped out entirely. She had had enough of showbiz and its demands and returned to the United States to care for her aging mother, refusing all contact with those interested in her past. The only exception was Mr. Kennedy, the saxophonist, with whom she had regular phone calls.

Ms. Shane’s story was introduced to a new generation in 2010 by the CBC radio documentary I Got Mine: The Story of Jackie Shane. Elaine Banks, the writer-narrator behind that documentary, finally got to speak with Ms. Shane by phone last month. During the interview, which was broadcast on the CBC Radio show q on Feb. 8, Ms. Shane expressed acceptance of her late-in-life recognition. “I thought I was well hidden, and I wasn’t!” she told Ms. Banks. “You found me and things just started to happen. I wasn’t comfortable with it [at first] but I can adjust and that’s what I’ve done.” Ms. Shane added that she always felt comfortable in Canada: “One cannot choose where one is born,” she told Ms. Banks, “but you can choose your home. I chose Toronto. I love Toronto. I love Canadian people. I consider myself a part of them. The Canadian people have been so good to me.”

Even with all the attention, Ms. Shane remained reclusive to the end – shunning all face-to-face encounters. Mr. Haust says: “Jackie battled so hard for so many years to remain a mystery and she mostly succeeded – that’s quite a veil.” Ultimately, Jackie Shane left the world with an indelible image of a vivacious performer and the thrilling sound of a soul singer with a voice that just wouldn’t quit.

Originally published in The Globe and Mail, March 2, 2019