Q & A with Elvis Costello and Allen Toussaint Elvis Costello is rock’s renaissance man. Along with writing and recording his own songs — some of the wittiest and most acerbic in the pop catalogue, Costello has produced a number of Britain’s best bands, including the Pogues, the Specials and Squeeze. The husband of Diana Krall has also become something of a pop commentator, penning liner notes for CD reissues and acting as a contributor to Vanity Fair. A future Rock and Roll Hall of Famer himself, Costello has collaborated with some of pop’s biggest heavyweights, including Paul McCartney and Burt Bacharach. His latest partner is Allen Toussaint, the legendary New Orleans artist, best known for writing numerous R&B hits and producing the Meters, Dr. John, Little Feat and Paul Simon, among many others. Costello and Toussaint paired up to create The River in Reverse, a mix of Toussaint originals and six new songs written by the boys. It’s a brilliant album that promises to put the spotlight back on Toussaint and New Orleans, as the city recovers from last year’s Katrina disaster. Inside Entertainment spoke with Costello and Toussaint, as they prepared to hit the road, about the Big Easy and the making of this life-affirming project.

INSIDE E: How did the hurricane affect each of you?

ELVIS COSTELLO: I have friends there and people that I’ve worked with that I was concerned for. Thankfully, as it turned out, a number of them were out on the road or were evacuated, including Allen.

ALLEN TOUSSAINT: I lost everything. My house had six feet of water in it. I lost all of my possessions, a lot of my archives. As a writer, there’s always a lot of work in progress. It was all lost. But I’m okay with that now. I’m alive and my family is alive, as are most of my friends.

IE: The two of you had previously collaborated in the 1980s, on a track from the Yoko Ono tribute recording and one of the songs on Elvis’s Spike album. How did you come to work together on The River in Reverse? 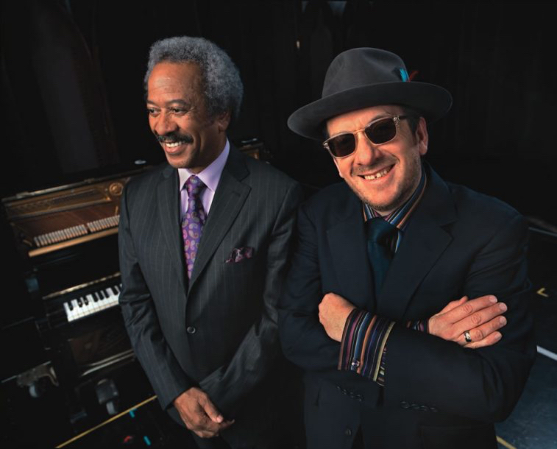 EC: Well, Allen was able to get out of New Orleans and get to New York. By this time, I had been asked to take part in the Higher Ground benefit for Katrina survivors at New York’s Lincoln Center. I got reacquainted with Allen and he showed an amazing perseverance and stoicism that was absolutely humbling. He was so open to new things. Within a week, we were discussing some kind of record. My initial thought was a Toussaint songbook record. Those sorts of things used to be very common in the 1950s. When I was a kid, we had the records in our house, like Ella singing Cole Porter. It’s kind of died out, because everybody thinks they can write their own songs now, whether or not they can. Allen’s songs are really worth hearing again. I felt there were a number that I could do and make my own.

AT: Elvis came down a couple of times to catch my set at Joe’s Pub in the East Village. We got to talking. He’s really the one responsible for this album. Elvis is such a student of music. He knows things about New Orleans music that completely surprised me.

IE: Were you surprised that Elvis didn’t choose to record some of your better known songs like “Sneakin’ Sally Through the Alley” or “Working in a Coal Mine”?

AT: Well, Elvis is not a strictly A-side guy. He’s a B-side person in many ways. It was wonderful to have him pick some of my lesser-known songs like “Wonder Woman.”

EC: I honestly felt there wasn’t anything that I could add to Allen’s “Southern Nights,” which people know by Glen Campbell. “Working in a Coal Mine” might’ve been fun to play, but I didn’t think I could possibly top Lee Dorsey’s version. I wanted to introduce Allen’s compositional voice first on the record, for people who didn’t know his writing, so I opted to do “Nearer to You.” Then, from “Who’s Gonna Help Brother Get Further?” to “Ascension Day,” the songs relate in some way to the situation in New Orleans now, even though some of them were written 30 years ago. There’s the irony, that Allen’s songs like “Who’s Gonna Help Brother Get Further?” and “Freedom for the Stallion” have found their moment as much now as when they were written.

IE: The two of you wrote five songs together, including the extraordinary “Ascension Day.” How did the collaborative process work?

EC: It was curious because at first we didn’t know how to begin this conversation. Then Allen started playing [Professor Longhair’s] “Tipitina,” which I found really moving. I went away, wrote something for it and came back and sang it over what became “Ascension Day.” By the end of the day we had three more songs, all different.

IE: The album was recorded initially in Hollywood with members of each of your bands, the Imposters and the Crescent City Horns. What was it like when you moved the recording to New Orleans?

EC: I’m glad that we got to take some of the music there. It was good to show people that it can be done and they shouldn’t be fearful. But it was also a very chastening experience. We went down into the worst areas, not to be morbid but to see with our own eyes what had gone on. It was pretty devastating. We got within 50 yards of where the levee had been breached. There simply wasn’t any work going on. It’s very sad to see people’s possessions still in trees and cars on top of houses and such. You can’t help but have it affect you. 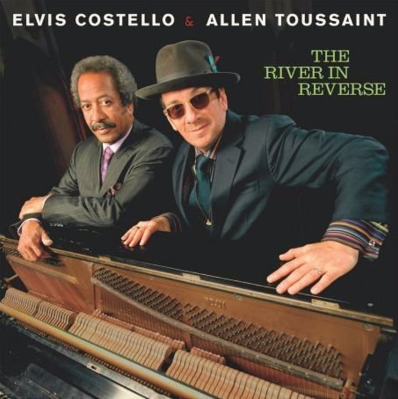 IE: Elvis, I gather it was your anger about the situation that sparked a couple of the album’s most powerful songs, including the title track and “Broken Promise Land,” which you cowrote with Allen.

EC: There were some dreadful — shameful — failures at every level of administration, from the city right up to the administration in Washington. The title track is about a general tide of selfish, wrong-headed thinking that needs to be turned around. “Broken Promise Land” was triggered by the blasphemy of supposed Christians who said that what happened in New Orleans was a judgement on its sinfulness. I think that was extraordinarily arrogant. The charity part of Christianity seems to have been edited out While we’re very hot on all the Old Testament, ‘eye for an eye’ stuff right now were not so hot on the forgiveness and understanding part. I’m not cynical, I’m just very deeply sceptical about dark forces in the political world. But Allen’s optimism had a good effect on me, quite leavening.

IE: A final word about New Orleans, its significance and future?

EC: The way the society developed there is out of step with everywhere else. The city continues to be out of step, in a good way and a really bad way. It’s a fascinating place. In some ways, its unique and completely distinct from America. In other ways, it’s the epitome of all the contradictions of America. And so much utterly great music has come from it.

AT: I have no doubt that New Orleans is coming back. This is just an intermission. Its spirit is much too strong for it to disappear.

Originally published in Inside Entertainment magazine May 2006