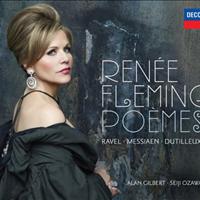 She’s been called the people’s diva and America’s favorite soprano. Renée Fleming is certainly no ordinary opera star. The 53-year-old mother of two teenage daughters has sung with Lou Reed and Rufus Wainwright, performed on the Lord of the Rings soundtrack and recorded a jazz and folk album called Haunted Heart. Recently, she released her most adventurous recording to date: Dark Hope, a collection of covers by such indie rock groups as Arcade Fire, the Mars Volta and Death Cab for Cutie. Her video of the band Muse’s song “Endlessly” featured actor Matthew Modine as well as her daughters Sage and Amelia.

But, first and foremost, Fleming is an opera singer—and one of the world’s best. The prima donna of choice for Prince Charles at Buckingham Palace and at public ceremonies like U.S. President Obama’s inaugural celebration, she won a Grammy Award—her third—in 2010 for her album Verismo, a collection of arias by Puccini and his contemporaries. Now, with Poemes, Fleming tackles the romantic works of French composers Maurice Ravel, Olivier Messiaen and Henri Dutilleux. Says Fleming: “For the sheer sensual joy of singing, no language gives me more pleasure than French.”

That sensuousness shines through on Ravel’s Shéhérazade, a longtime favorite of the singer’s, which she records here for the first time. Fleming also lends her warm vocals to Messiaen’s collection of love songs to his young wife, Poèmes pour Mi. But the album’s highlight is the world premiere of “Le temps l’horlage,” which Dutilleux wrote specifically for Fleming. Performed with the Orchestre National de France and led by legendary Japanese conductor Seiji Ozawa, the piece—featuring the novel addition of harpsichord and accordion in the orchestra—captures all of the most voluptuous and expressive qualities of her voice. “I am transported by the beauty of this work,” says Fleming. So, too, are we.