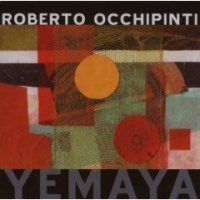 the gentle ballad "A Ilha" (The Island), by popular Brazilian singer-songwriter Djavan, to which Kevin Turcotte adds an achingly sweet flugelhorn solo. The next three compositions come from two of Occhipinti's most talented and trusted collaborators: Durán provides "The Shadow" and "Herbie's Mood", a playful piece inspired by Herbie Hancock, while Dwyer contributes "Bernardo's Tango," a sensuous tribute to Italian film director Bernardo Bertolucci.

Occhipinti pays a few tributes of his own—all of them to drummers. Having previously dedicated numbers to percussionists Horacio Hernandez (on Trinacria's "El Negro") and Dafnis Prieto (on The Cusp's "Prieto Azul"), here Occhipinti gives his respectful nod to drummers Mark McLean on the percolating "Mank", to Ernesto Simpson on the moody "El Otro Tipo" and to the late Pancho Quinto on the spiritual "Yambu". The latter, in particular, is deeply moving, as the bassist bids a heartfelt farewell to the legendary Cuban musician whom he called a friend, colleague and teacher. On all three numbers, Occhipinti's gifts as a writer, arranger and soloist are on full display.

Born in Toronto of Sicilian ancestry, Occhipinti has long straddled the worlds of jazz and classical music. As a classical bassist, he has been a member of the Winnipeg Symphony, Hamilton Philharmonic and Canadian Opera Company orchestras. Meanwhile, Occhipinti has toured and recorded with Blue Note recording artist Jane Bunett on three of her albums, including the Juno Award winning Ritmo and Soul and the Grammy nominated Alma de Santiago. At the same time, he has recorded a trio of albums with Hilario Durán, including the Juno Award winning New Danzon, which the bassist also produced. Two other ventures saw him tour with experimental hip-hop stars Gorillaz and perform with Damon Albarn, front man of British rockers Blur, on the critically acclaimed Mali Music project.

With the ambitious Yemaya, Occhipinti has skillfully brought those worlds together, marrying his classical training with his abiding passion for Latin jazz and world music. In doing so, he has set himself apart as an innovator, as well as one of Canada's most versatile and adventurous musicians.