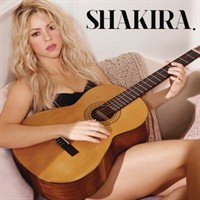 The world’s hottest Hispanic star has a full plate outside of music: along with running her educational foundation, she regularly meets with global leaders and gives talks to Harvard and Oxford students. But it wasn’t Shakira’s activism that held up her 10th album, but the birth of her son, Milan, with Spanish soccer star Gerard Pique. The Colombian singer pays tribute to baby and boyfriend on her guitar ballad “23,” which she dedicates to the FC Barcelona star and includes the gurgling sound of their newborn. Elsewhere, Shakira aims for a country crossover on “Medicine,” a duet with fellow Voice coach Blake Shelton, and embraces a reggae groove on “Cut Me Deep.” Having topped charts with “Waka Waka,” her official anthem for the 2010 World Cup, here she teams up with Brazil’s Carlinhos Brown on “La La La” for a rhythm-crazed nod to this summer’s soccer tournament. Also featuring “Can’t Remember to Forget You,” her steamy hit pairing with Rihanna, Shakira’s ambitious new album scores on all fronts.