A few days on the concert circuit with the Canadian band Sloan defy just about all the usual rock ‘n’ roll expectations. Excessive drugs and boozing? Try ginger ale and early-ish to bed. Dalliances with groupies? Try looking for a phone to call the steady girlfriend. A whole lot of egotism and attitude? Try nice, earnest, uncompetitive. The alternative-pop quartet, which put Halifax on the music map in the early 1990s, has added a decidedly grounded element to grunge--in fact, Sloan soon abandoned that bristly style for more melodic, even retro, sounds. Perhaps the only rock indulgence the four musicians allow themselves is basking in the adulation of fans.  “We’re not getting drunk or laid,” says bassist Chris Murphy, “so at least it’s some kind of perk when we’re on the road.”

It’s Wednesday night in London, Ont., and Sloan fans are crowding into Drink and Eat Too, a popular downtown watering hole. Tonight’s audience is atypical for the nightspot, which usually caters to a beer-guzzling college crowd. While there are undergraduates from Fanshawe College and the University of Western Ontario, there are also high-school students clustered in a roped-off, non-drinking area on the main floor. After an opening set by singer Rufus Wainwright, whose flamboyant cabaret songs fall on largely indifferent ears, Sloan takes the stage.

With the first crunching-guitar sounds of “She Says What She Means,” from the band’s latest album, Navy Blues, the four musicians are greeted by a chorus of whoops, hollers, shrieks and sighs—especially from some besotted teenage girls in the front rows.  “I love you, Chris, “shouts one admirer, as Murphy steps up to the microphone.  “Oooh, Jay,” squeals another, directing her attention at guitarist Jay Ferguson. By the time Sloan finishes its 90-minute set of hard rock and sweet pop, the guys in the crowd seem equally knocked out.  “Totally awesome,” gushes Jason Wilkin, a 25-year-old Fanshawe graduate. 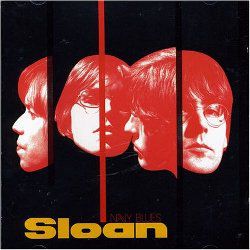 Cute and cool. It may be unfair to reduce Sloan’s appeal to those two qualities, but they seem the main factors in the band becoming a favorite of the 12- to 25-year-old set. From the beginning, Sloan’s fans have been drawn as much to the band’s clever pop songs as to the members’ boyish good looks. "Underwhelmed," a single from the group’s first, six-cut CD—released on the band’s own Murderecords label—was a wry ode to teenage angst that became a staple of college and alternative radio play lists. It landed the group a prestigious deal with David Geffen’s company DGC, then home of Seattle grunge heroes Nirvana, which resulted in Sloan’s first full-length album, Smeared.

Sloan’s next recording, Twice Removed (1994), featured such youth anthems as “I Hate My Generation” and helped turn Halifax into what the music industry regarded as  “the Seattle of the East. “ It also topped the Top 50 Canadian Albums of All Time, a poll conducted by Toronto-based Chart magazine. Since then, the band has added commercial success to critical accolades. Its third album, the wonderfully Beatlesque One Chord to Another (1996), was a major breakthrough, reaching sales of more than 80,000 copies in Canada. With this year’s more varied Navy Blues, whose influences range from the Beatles to AC/DC, Sloan now seems destined to surpass even that mark.

Although the group, along with blues rockers Big Sugar and rapper Maestro, is one of the hottest Canadian acts on this fall’s campus circuit, Sloan finds itself at a turning point in its seven-year history. All four members—the others are guitarist Patrick Pentland and drummer Andrew Scott—have turned (or will soon turn) 30. Proudly democratic (the four share singing and songwriting duties, dividing royalties evenly) and fiercely independent (the band remains on its own Murderecords label, after parting ways with Geffen and another U.S. company), Sloan is struggling to redefine itself and rewrite its rules for survival.

Already, the group is an anomaly. Hardly rebels, the band members are all university or college graduates from nice middle-class families. In a world that demands one recognizable face to front a band, Sloan insists on four. Over dinner in an Indonesian restaurant before the Drink gig, Murphy and Pentland discuss Sloan’s existential crisis.  “For one thing,” says Pentland, between bites of spicy noodles, “we’re not sure where we fit on radio any more. Is it classic rock or commercial alternative? Our influences are obviously oldies, but we’re perceived as a modern band.” Murphy, pointing out that all four members have moved to Toronto, three of them to be with their girlfriends, adds:  “We seem to have lost our context somewhat. We used to be that group from Halifax; now we’re just another band on MuchMusic. That’s scary for us.” 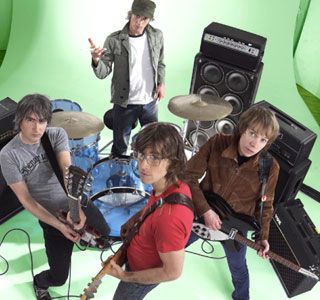 After the Drink show, Murphy, Ferguson and Pentland reappear to sign autographs and talk with fans. It’s a nightly ritual for all but Scott, who usually prefers to chill out in the dressing room. The charismatic, wisecracking Murphy has the longest lineup of waiting girls.  “I think you guys are so great,” one female high-school student in platform sneakers tells him breathlessly. While Murphy gets loads of kisses, the quiet, diminutive Ferguson, who looks a little like Opie, the kid from the old Andy Griffith Show on TV, receives a good many hugs.

Later, Murphy and Ferguson head over to Call The Office, a London dance club where they have arranged to meet Wainwright. At the crowded, smoke-filled nightspot, Wainwright, a party animal who comes from a showbiz family (his mother is Kate McGarrigle, his father, Loudon Wainwright III), is already two sheets to the wind. When he finds out that the ginger-ale-sipping Ferguson and Murphy are strict teetotalers (they say they have never touched drugs, either), he’s outraged.  “What kind of tour am I on?” he bellows theatrically. “Are you guys Mennonites or something?”

Driving the band’s van back to the hotel, Scott pushes a cassette into the tape deck. Instantly, he and Murphy are pumped, rocking their heads like characters out of Wayne’s World. But it’s not the Smashing Pumpkins or Pearl Jam that they’re listening to; it’s “Surfin’ Bird,” the 1963 garage hit by the Trashmen.  “Everyone in Sloan listens to oldies, except Patrick,” admits Scott. Adds Murphy:  “Patrick says listening to oldies makes him feel like he’s wearing his dad’s clothes. But I’d rather wear my father’s suit than some kid’s baggy jeans.” Scott agrees. “There’s nothing on the radio today that makes me proud to be a part of the music industry,” he says. “There are too many bands, and for every 100 songs you hear there’s maybe one good one.” All members of Sloan are avid record collectors—especially Ferguson, who got his start working in a Halifax record store at the tender age of 12 and is the most knowledgeable. Says Scott:  “Jay’s the real music snob among us. “

The next morning, there’s a desperate search for decent coffee before hitting the road for the University of Guelph, where Sloan is performing that night. With freshly brewed java in hand, everyone piles in the van, including road manager Mike Nelson, who had to ensure that the equipment truck and crew got away early. The concert just got bumped from the Peter Clark Hall, where Sloan has played before, up to the W. F. Mitchell Athletic Centre. The crew will need extra time to set up in this larger, unfamiliar venue.

On the drive to Guelph, Ferguson is explaining the band’s “indie esthetic.” He and Murphy started out in punk bands in the ‘80s (and, earlier, in Kiss costumes on Halloween), emulating groups like Fugazi and later R.E.M.  “When we formed Sloan,” recalls Ferguson,  “we decided on three things—that we’d always divide the money evenly, that we’d play all-ages shows whenever possible and that we’d never open for other bands. We just always wanted to do it our way.”

Doing it their way has meant sacrificing the fast track to stardom in favor of control.  “Sure,” says Murphy, “we could be touring relentlessly in the States like the Ladies, but we wouldn’t last. Our manager [Chip Sutherland] is aware of the finite energy we have. Instead of kicking someone’s head in to get us on radio, he’s busy getting us back the rights to our records from Geffen. In the long run, owning our catalogue is far better for us financially.” For Murphy, Sloan’s new challenge is to find a way to grow up gracefully.  “Do you try to stay really young and play with Green Day, which is like a circus sideshow, or do you mature like Sting and make a boring record like Dream of the Blue Turtles?” he asks. “Trouble is, I’m not interested in either Green Day or Sting.”

So how does a band of ex-Haligonians survive in the fickle world of post-grunge pop? Just before he and his mates kick off a concert for 1,000 in Guelph, Murphy comes up with an answer.  “Sloan is four distinct characters. The band can’t exist without each one of us. Hopefully, our characters and our songs will keep people interested.”