At the dawn of the 1980s reggae music was bubbling up in Canada, finding an audience among fans of punk and new wave. Toronto, in particular, was a reggae hotbed, thanks to the city’s large West Indian community and a healthy club and concert scene that thrived on diverse sounds. Reggae legend Bob Marley had already visited Toronto four times, while many other Jamaican stars came and performed concerts. Some, like Jackie Mittoo and Leroy Sibbles, even stayed and made Toronto their home.

Several groups from Toronto’s Jamaican community, including Earth, Roots & Water and Ernie Smith & Roots Revival, staged regular shows at downtown venues like the Horseshoe Tavern and Hotel Isabella. And Ishan People, led by Johnny Osbourne, became the first reggae band in Canada to be signed by a major record company, issuing two albums on the GRT label. Of all the bands to emerge from Toronto in those punky reggae party days, arguably the best—and certainly the one that most reflected its Canadian roots—was Truths & Rights. 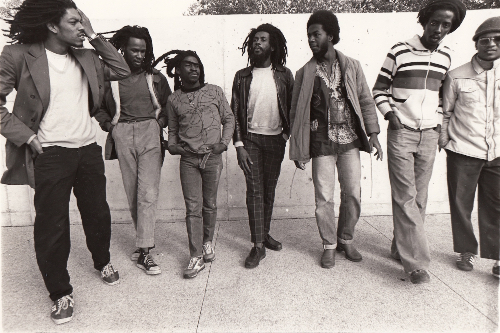 Formed in late 1977 by a group of Toronto musicians all of West Indian heritage, Truths & Rights arose out of Immi-Can, a black community project in Regent Park. Social concerns were top of mind and the band made a conscious decision to write protest songs about Canada, rather than the Caribbean. And musically, the group inventively mixed calypso and reggae with elements of blues, rock and r&b.

Performing at places like the Edge, Pirate’s Cove, El Mocambo and Palais Royale and opening for Dennis Brown and Third World at Varsity Stadium and for the English Beat at the Concert Hall, Truths & Rights quickly built a substantial following in Toronto. The group’s first recording, 1980’s “Acid Rain,” was a cautionary tale about pollutants “falling from our skies.” Written by band founder Mojah, together with dub poet Lillian Allen and the group’s graphic artist Ato Seito, it won radio station Q107’s Homegrown contest. 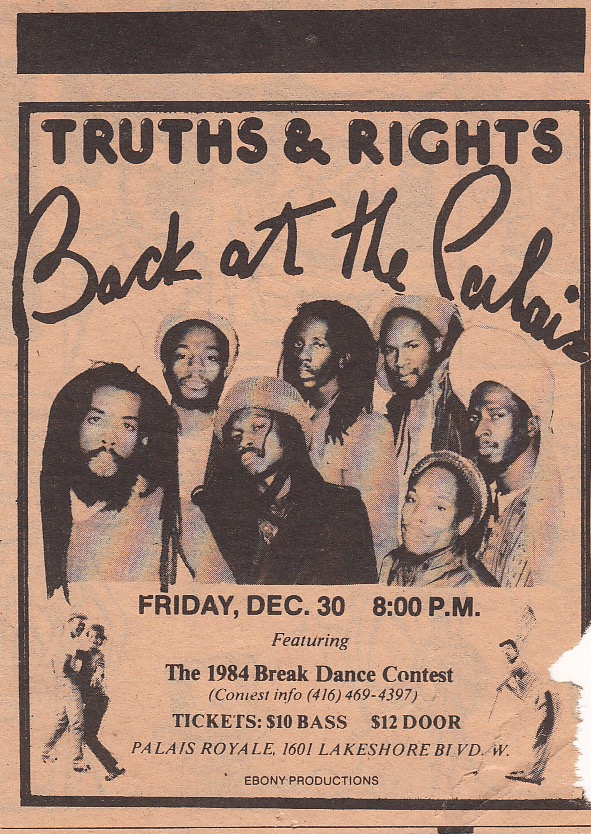 The following year, Truths & Rights tackled “racial tension” in Toronto with its next recording, the bluesy ska-reggae of “Metro’s No. 1 Problem.” “At that time, black men like Albert Johnson were being shot and killed by cops and Pakistani families were being harassed and beat up,” recalls Mojah. "We felt we had to address what was going on in our own backyard and make people aware of this.” The single’s B-side was the anthemic “Black Plight,” a song Mojah co-wrote with the group’s original Jamaican-born bassist Garry Lowe that included the rallying chorus “Time for us to unite, brothers and sisters, all over Jah world.”

“Metro’s No. 1 Problem” enjoyed good airplay on CBC and college radio and led Toronto Star critic Peter Goddard in 1983 to pronounce Truths & Rights the city’s band of the year. “The most vital of our reggae bands is Truths & Rights,” declared Goddard. “They differ from other reggae bands because they actually sing about this city—not about Kingston, Jamaica or Notting Hill in London, England.” The group’s high profile and extensive touring through Ontario and Quebec, arranged by Olivia Grange (now Jamaica’s Minister of Sports, Culture, Entertainment and Gender Affairs), seemed certain to push it to the next level. All that was missing was a record deal.

Sadly, the album Truths & Rights dreamed of releasing never materialized. “We weren’t a Top 40 type band,” says Mojah, “and not commercial enough for any record company to invest in us. We weren’t country, rock or r&b, so no one was interested. We found ourselves struggling to survive.” With financial pressures, the group’s members eventually went their separate ways. Bassist Xola formed Le Dub Sac; keyboardist Iauwata toured with Nightdoctor on the UB40 tour of England; drummer Abnadengel decamped to Jamaica to study with reggae elders and percussionist Quammie guested with groups like Martha & the Muffins. Mojah, who’d done double duty with Lorraine Segato, Terry Wilkins and Billy Bryans in the multiracial rock-reggae supergroup V, recorded with his soca outfit Compass and put out  a series of releases under his own name. 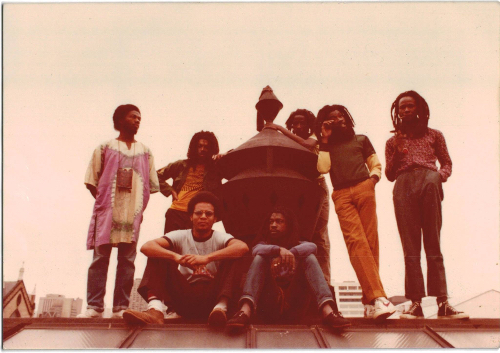 Now, nearly 40 years after the breakup, a lost album’s worth of recordings has been found and uncovered to finally complete the Truths & Rights story. The newly released digital collection Time For Us to Unite includes the previously released “Acid Rain,” “Metro’s No. 1 Problem” and “Black Plight,” along with six other songs and a dub version of “Acid Rain.” Of the new material, standout tracks include Mojah’s pulsing “Nuclear,” Iauwata’s infectious “Sweet Reggae Music” and lead singer Ovid’s “Crying in the Wilderness,” a drum-heavy Rasta hymn in the spirit of “Rivers of Babylon.”

The original two-inch tapes, recorded at Vezi Tayeb’s Kensington Sound Studio, had been lying dormant at a rural property outside Toronto. Quammie and other members of the band worked together to bring a complete album to fruition, but the deaths of Iauwata, Ovid and guitarist Vance Tynes stalled the process. It took the concerted efforts of Jeff Holdip, the group’s (and later Nelly Furtado’s) sound engineer, to complete the project. While there are still several great Truths & Rights recorded tracks missing, including “Live Up,” “Rockers Time” and “Thirty Degrees in Babylon,” this collection represents an important addition to the legacy of Canadian reggae, a story well told in Jason Wilson’s recent book King Alpha’s Song in a Strange Land. Buy book here

Later this year, fans can look forward to a special vinyl release of these excellent Truths & Rights tracks. And still to come is a dub remix of “Black Plight” by the Juno Award-winning artist Dubmatix. In the meantime, Time For Us to Unite is now available through Spotify and  iTunes Buy album here and lovers of crucial roots reggae finally get to feast on the sound of this formidable band.