The North American rhythm-and-blues circuit of the 1950s and ’60s had a surprising number of artists pushing gender boundaries. Macon, Georgia’s Little Richard, who’d once performed as Princess Lavonne in a traveling tent show called Sugarfoot Sam's, was certainly the best known. But Richard was heavily influenced by Esquerita, a flamboyant and feminine pianist from New Orleans.

Also from New Orleans were two other artists who were gay or transgender or nonbinary: Patsy Vidalia, born Irving Ale, hosted the city’s legendary Dew Drop Inn and recorded as Pat Valdelar; and gay soul singer and impresario Bobby Marchan regularly switched between male and female clothing—complete with makeup and accessories—during performances.

In Toronto, there was Jackie Shane. A black trans woman with an extravagantly glamorous image and a wildly soulful voice, Shane arrived from Nashville in 1961 and immediately shook up the city’s music scene. “Jackie was a quietly flamboyant diva, really ahead of her time,” recalls Toronto soul singer Shawne Jackson-Troiano. “She was always just herself, being who she was born to be.” Adds r&b saxophonist Steve Kennedy: “She could really sing her ass off and was on par with artists like Little Richard. And people loved her—just loved her—because she was so real.” 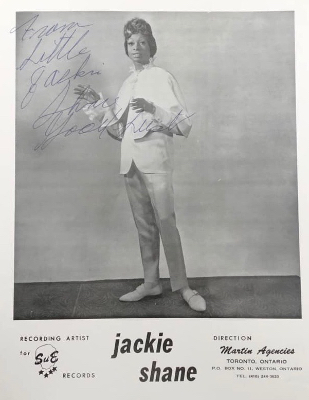 At clubs up and down Yonge Street, from the Saphire Tavern and the Hawk’s Nest to the Brass Rail, Shane thrilled audiences who embraced the cross-dressing performer in shimmering sequin pantsuits, full makeup, false eyelashes and fabulous bouffant. While the slinky, sassy “Any Other Way” was her biggest hit, Shane recorded other songs that seemed autobiographical, whether they were originals or covers. “Sticks and stones may break my bones,” she sang on Titus Turner’s “Sticks and Stones,” "but now talk don’t bother me,” which echoed the slings and arrows she had to deflect from homophobic hecklers. Her cover of “Stand Up Straight and Tall” perfectly expressed her defiant self-pride and the two sides of her final single, “New Way of Lovin’” and “Cruel Cruel World,” both originals, are clearly personal and heartfelt.

Although she passed away back in Nashville in 2019, after a long period out of the limelight, Shane was rediscovered before her death and is now fondly remembered as both a pioneer transgender performer and a hugely influential figure in Toronto music history.