Zal Yanovsky may be the unlikeliest candidate for success ever to emerge from Toronto’s music scene. Before he joined Denny Doherty in the Halifax Three and headed south to serious Sixties fame in the Lovin’ Spoonful, Yanovsky was broke and scuffling around Yorkville and the Annex, learning to play guitar and stealing milk off front porches so he could collect the deposit from the bottles. Unable to afford rent anywhere, Yanovsky took to sleeping in a laundry dryer at 163 Dupont, right next door to the Gate of Cleve, where he perhaps dreamed he might one day perform. 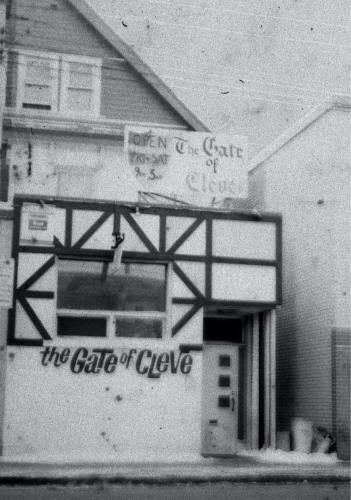 In a poster designed by future realist painter Ken Danby, the Gate of Cleve coffeehouse advertised “folksongs and folk music presented in the relaxed atmosphere of an old English pub.” Owner Carl Noylander booked some of the city’s earliest folksingers there, including Greg Curtis, Peter Wyborn, the Pioneers and the Wayfarers and, later, such bluegrass and blues stars as the Greenbriar Boys, John Lee Hooker and Mississippi John Hurt. 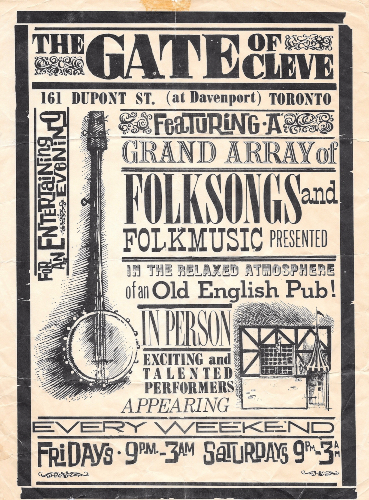 Yanovsky was still a long way from being ready for prime time. University of Toronto student and aspiring actress Jackie Burroughs remembers encountering him at the Club Automatic laundromat. “I met Zalman when I went in to do my laundry one day and he was asleep in one of the dryers,” she once told me. “He looked like a deadbeat, with long hair, a bad complexion and green teeth.”

Zal was the son of Avrom Yanovsky, a Jewish immigrant from Ukraine who drew political cartoons for the Communist Party of Canada’s Canadian Tribune newspaper. As a kid, Zal attended Brampton’s Camp Naivelt, a summer retreat for red diaper babies that included Sharon Trostin, better known as Sharon Hampson, of pre-school pop stars Sharon, Lois & Bram. Hampson remembers Friday nights at Naivelt always involved campfire hootenannies, sometimes with illustrious guests like Phil Ochs. Once, Hampson recalled, Pete Seeger performed a chain-gang song using an axe that he swung down forcefully as he sang. “Afterwards,” she says, “we all ran around gathering up wood chips for him to autograph.” 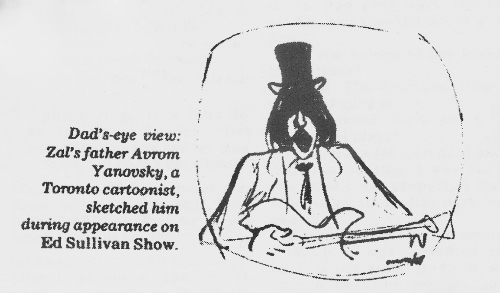 Young Yanovsky, who’d dropped out of Downsview Collegiate at 16, started showing up at folk clubs like the Village Corner and the Bohemian Embassy, absorbing as many guitar techniques as he could. At the time, Doherty and his Halifax Three folk group had arrived in Toronto, determined to break into the burgeoning folk scene. The suit-wearing trio had some success, cutting two albums for Columbia Records performing their polished act at nightclubs around the city. But they needed something extra, an original spark that would set them apart. Yanovsky proved just the ticket.

“Zal was a crazy kid, a notorious practical joker who played guitar like he had twelve fingers,” Doherty told me. “I think he joined just after he got back from Israel, where he’d been thrown off a kibbutz for driving a tractor into a brick wall. Those sorts of things were always happening to him. But he had an incredible energy.” 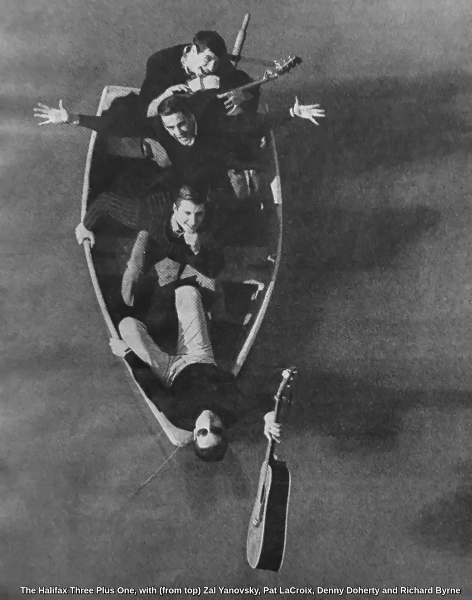 With Yanovsky in their ranks, the group—now called the Halifax Three Plus One—landed a few gigs around Toronto, including one at the Fifth Peg and another at the Colonial down on Yonge Street. Then the quartet headed south and joined a touring folk-music show called “The Original Hootenanny USA” with the Journeymen, featuring future Mamas & Papas founder John Phillips. For Doherty, it would prove a fruitful connection.

After the Hootenanny USA tour ended back in late ʼ63, the Halifax Three broke up and Doherty and Yanovsky both found work in a Washington, D.C. club called Maxʼs Pipe & Drum, waiting on tables. But it wasnʼt long before the two were on the Pipe & Drumʼs stage, in a surf group with a neophyte drummer, playing songs by the Ventures and the Surfaris. But all hell broke loose, Doherty recalls, the night that Hugh Romney, the future Wavy Gravy of Woodstock fame, dropped into the club. “We knew Hugh from Greenwich Village,” says Doherty, “where he was a stand-up comedian. He had some pot with him and we turned the drummer on. But the kid, whoʼd never smoked before, freaks out and goes running home, screaming that heʼs losing his mind. The next day his father shows up at the club and starts getting heavy. It was basically, ʻdonʼt let the sun go down on you in this town.ʼ”

Back in New York, Doherty and Yanovsky hooked up with singer Cass Elliot whom they’d met on the folk circuit. With Elliotʼs first husband, Jim Hendricks, they formed Cass Elliot & the Big Three, a folk quartet. Then Zal and Denny saw the Beatles on The Ed Sullivan Show in Elliotʼs apartment. Recalled Doherty: “Right away, Zal and I couldnʼt wait to get electric instruments. We grew our hair—pretty soon Zalʼs was in his face, looking like an early version of Slash of Guns ʼnʼ Roses.” The four switched to folk-rock and changed their name to the Mugwumps (out of William Burroughsʼ Naked Lunch). According to Yanovsky, the Mugwumps also briefly recruited harmonica player John Sebastian because “he had the best grass in New York.” As it turned out, the Mugwumps had a short life. 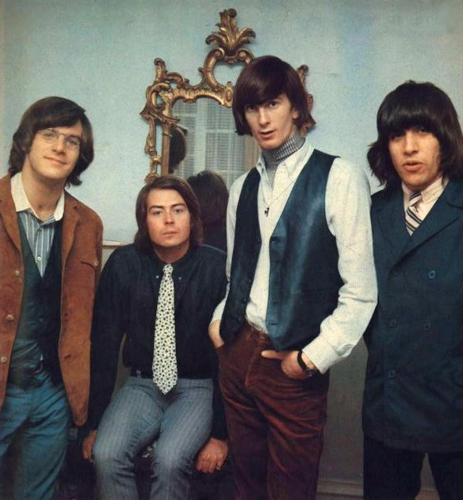 While Doherty’s future became secured with Elliot, Phillips and his wife Michelle as the Mamas & the Papas, Yanovsky’s was incubating in the damp, cockroach-infested basement of New Yorkʼs Albert Hotel with Sebastian. Together, they began forging a unique sound of their own, mixing Yanovskyʼs bluesy electric guitar with Sebastianʼs Appalachian autoharp. With bassist Steve Boone and drummer Joe Butler, they christened themselves the Lovinʼ Spoonful (after a song by Mississippi John Hurt) and took their acoustic-electric sound into Café Bizarre, where they worked for $35 a week and all the tuna-fish sandwiches they could eat. 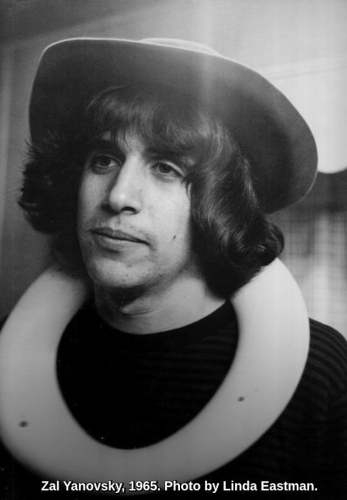 By the summer of ʼ65, the Spoonful had landed a breakthrough engagement at the Nite Owl café. After drawing line-ups and rave reviews for Sebastianʼs songs and Yanovskyʼs wild, on-stage antics, the group signed with Kama Sutra Records. The Spoonfulʼs “good-time sound”—a mix of country, blues, rock and jug-band sounds—was a refreshing change from the protest music that had dominated the Greenwich Village scene. Yanovsky chuckled, “Both of my parents were Communists, so I had already stormed a lot of barricades. John and I just wanted to have some fun.” The fun started when “Do You Believe in Magic” hit the charts—just seven months after the group had formed—and fame for Yanovsky, the onetime resident of Toronto’s Club Automatic Laundry, was sealed.

Adapted from Before the Gold Rush: Flashbacks to the Dawn of the Canadian Sound by Nicholas Jennings. Originally published in 1997 by Penguin Books.