Liner Notes
It’s the inevitable fate of a multi-faceted artist as ridiculously talented as Paul Quarrington that one creative field should overshadow the others. In Paul’s case, his musical career was rudely hijacked by his literary success. Long before the awards for fiction, humour and screenplays, Paul was a musician—and an extremely good one. He played bass and sang in the eccentric cult-rock band Joe Hall & the Continental Drift, a band his guitarist brother Tony once described as “an acquired taste that no one acquired.” He wrote songs, played guitar and sang with lifelong friend Martin Worthy in the underrated folk duo Quarrington Worthy—even scoring a number one hit in 1980 with “Baby and th...
Continue reading
Tags:
paul quarrington
Tweet
4656 Hits

For some people, ska music died with the passing of Britain’s two-tone movement in the 1980s. But they only knew it as a post-punk dance craze anyway. As Jamaica’s peppy precursor to reggae, pioneered by legends like Jackie Mittoo, Don Drummond and Prince Buster, ska has a long and vibrant history whose influence still reverberates today.

In England, the ska banner was first held high by Desmond Dekker, a Jamaican singer whose songs “007 (Shanty Town)” and the classic “The Israelites” sent syncopated shock waves across radioland in the 1970s. By the end of the decade, ska was bubbling up big time in Old Blighty, with two-toners The Specials and The English Beat opening for the likes of Elvis Costello and The Clash.

Into those heady days stepped Adrian Miller, Mr. Rude Boy himself, a young Jamaican who found England’s music scene totally inspiring. “The whole climate was more experimental than what was going on back home,” recalls Miller. “There were older musicians like Saxa and Rico, who had first started doing ska back in Jamaica, playing with young groups like The Beat and The Specials. It was an amazing time.”

Liner Notes: The Ugly Ducklings – Too Much Too Soon 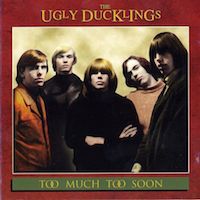 On a spring night in 1965, a warm breeze blew along Toronto’s Yorkville Avenue, carrying with it a strange mixture of scents: rich coffee, pungent marijuana and noxious automobile exhaust. Cars crawled along the one-way street between Bay and Avenue Road, past sidewalks filled with teenagers in Beatlecuts and miniskirts. Some sat on café patios, others strolled along the tree-lined boulevard or hung out on doorsteps. Boys watching girls watching boys.

Like flowers in a hothouse, the musicians in Yorkville thrived on the responses of those who flocked to hear them. There was literally something for everyone: the traditional jazz of Jim McHarg & his Metro Stompers at the Penny Farthing, the delicate ballads of Joni Mitchell at the New Gate of Cleve, the blues folk of John Kay at the Half Beat and the stirring songs of Gordon Lightfoot at the Riverboat.

Meanwhile, the new pop sound had infiltrated the village, with British-influenced bands everywhere: Jack London & the Sparrows at the Café El Patio, Dee & the Yeomen up at the Night Owl and the hard-rocking Ugly Ducklings